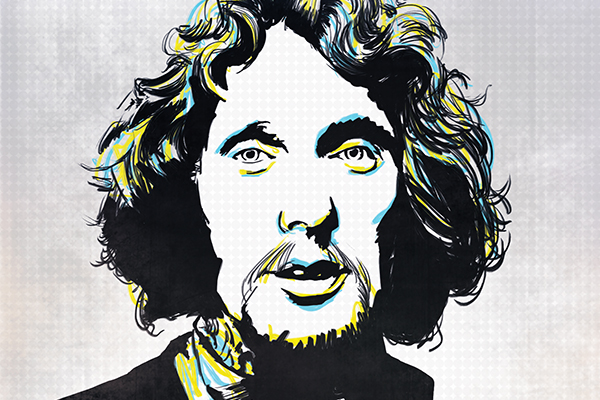 The legendary drummer is making everyone around him miserable.

[dropcap]W[/dropcap]hen Ginger Baker returned to New York recently, after eight years of self-exile, he was everything everyone knew he could be. There was the same old surliness, the same old irascibility, and the same old belligerence that fell same old flat.

Baker is the cantankerous former drummer of Cream, rock’s first supergroup. As revealed in Jay Bulger’s recent Beware of Mr. Baker, a widely lauded documentary in which the 70-something musician broke the 20-something director’s nose with a metal cane, his life has been rather headline-worthy, featuring drugs, divorce, drugs, drink, drugs, violence, drugs, infidelity, drugs, financial ruin, drugs, immigration problems, and drugs. Not for nothing was he once voted the rock star least likely to survive the ’60s.

Baker is opinionated, intimidating, overbearing. He speaks his mind, and couldn’t care less whose feelings get trampled in the process. He blusters and bullies with such panache that he is almost likeable.

Last year, shortly before the release of Beware of Mr. Baker, he and his fourth wife moved to England from South Africa, where they owned a 300-acre ranch with 38 polo ponies. In London, following an impromptu jazz session, Baker formed a new band, Ginger Baker’s Jazz Confusion, with saxophonist Pee Wee Ellis, bassist Alec Dankworth, and percussionist Abbas Dodoo. When the quartet arrived stateside recently, Baker was wearing jeans, an Oxford button-down and an expression that would have soured cream. His famous shock of red hair was now ghost-white; the skin as thin as parchment. He looked mummified.

The first stop on Jazz Confusion’s two-week American tour was New Hope, Pennsylvania. Heavily medicated to relieve the constant pain of degenerative arthritis of the spine, he told the crowd: “I want people to understand, I’m 74 years old and I’ve got a lot of physical limitations. If I can’t play all you want me to, I’m sorry. But I do my best.” He repeated the disclaimer two nights later at the Iridium in New York, adding helpfully, “If you came to hear me play ‘Toad,’ you’re an idiot. I’m 74.”

In the old days, according to the film, Baker’s requirements backstage were exacting: a case of beer, two black hookers, and a white limo. To deliver him to a radio interview on his first morning in Manhattan, SnagFilms, the distributor of the documentary, met only the last of those demands. Unimpressed by the conveyance and enraged by the early hour (11 a.m.) he spent the entire ride to the station pouting, scowling and mumbling: “Jesus Christ! This is bullshit! I want to be in bed! I need a smoke!”

Baker was accompanied by his manager, a put-upon Brit named Doug Ward who nurse-maided him around town like the young television writer shepherding the dissolute screen idol away from trouble in the 1982 film My Favorite Year. When Ward bent down to tie Baker’s shoes, the drummer grunted and bellowed like a wounded water buffalo.

“Ginger screamed because he was upset with me,” Ward later confided. “I had given him the wrong date for one of his upcoming shows.” Does Baker scream at him when he gets things wrong or right? “No difference, really; he screams pretty consistently.” Is Baker hard to deal with? “Nah, nah.” Ward says casually, the same way people brush lint off their shoulders. “This is a great job.”

Ward says his great job consists largely of hacking the edges off strips of bacon. Baker only likes the chewy fat at the very center. Ward cooks Baker entire meals of bacon centers. Bacon and corn flakes are on the list of Baker’s likes. (It’s a very short list.) His catalogue of hates is impressive. When Hirsch offers to fetch him a cup of tea, he snaps: “I don’t want your rubbish America tea. Piss off!”

At the top of his hate pantheon are the Rolling Stones, The Who, heavy-metal music, pop music, rock music—any music, in fact, except jazz. On tour, his sets were composed of tense, African cross-rhythms, not unlike what he once played with Nigerian Afrobeat singer FelaKuti in the 1970s. Baker resists being photographed, and he doesn’t like being interviewed. “It’s like getting stitches. It’s real painful.” But he submits, treating interviewers simultaneously with complete tyranny and perfect democracy. More often than not, he answers questions with an expletive, and sometimes with an upraised palm or just a middle finger.

What was the last record that excited you?

It’s what you do, though.

“Yeah. So when you’re talking about a bus driver, his holiday is driving?

After the first Iridium gig, Baker hung out in his hotel room with Bulger and Red Hot Chili Peppers drummer Chad Smith, who was filming a series for YouTube. Stretched out on a leather recliner, he chain-smoked and relayed anecdotes while adjusting and readjusting a pair of rectangular sunglasses. Smith asked Baker, “Ever heard of the Chili Peppers?”

“Ever heard our music?”

Bulger told Baker that seeing him perform again brought tears to his eyes. “You always said you’d never get onstage again, but here you are,” Bulger said. “And you looked happy up there.”

Baker looked momentarily startled and growled, “Shut up. You’re an idiot. I’m doing this for the money.” Baker gazed at Smith, cocked his cigarette at a jaunty angle and said, “You know, I busted his nose.”

The next night, before a screening of Beware of Mr. Baker, Baker tried to break a large Evian bottle over Bulger’s head. After he dodged the bottle, Bulger sighed. “I’m done with that mother. Never want to deal with him again.” After the screening, Baker blew off the question-and-answer session. “Ginger is not in a good mood,” Ward explained. As Baker leaves for the Iridium, a fan tries to take a selfie with him as he shuffles past. Baker bares his fists and shouts, “I’ll put you right out!” Hirsch separates the two.

While Baker crushes out his cigarette, I ask, What kind are they?

I meant, What brand?

Baker seems quite happy screaming at me, and once I get the hang of it, I’m quite happy, too. I feel like a child who is talking back to a teacher; exhilarated and summoning the courage to be rude—then waiting for the fireworks.