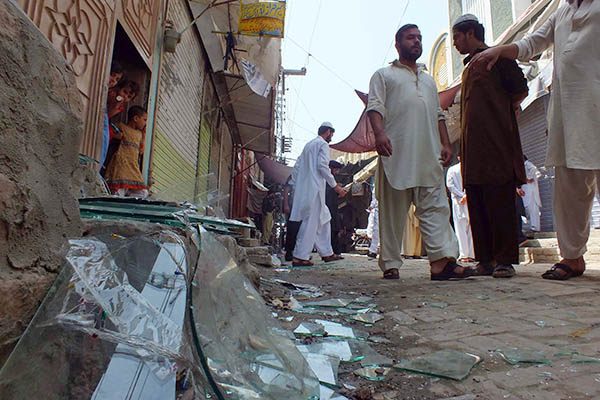 At least 11 people wounded in attack targeting building at end of school day.

A bomb wounded 11 people, mostly children, when it exploded outside a Pakistani girls’ school on Thursday, a doctor said.

The bomb went off at the end of the school day as pupils walked into a street lined with fabric shops in the northwestern town of Bannu, which has been a flashpoint for Islamist militancy.

Dr. Omar Zeb said that 11 people had been brought to the local hospital—seven primary schoolgirls and four other people who had been in the street.

Police official Azad Khan said that at least four girls, two boys and a man had been wounded. Three of them are in serious condition he said.

There was no immediate claim of responsibility but Islamist militants frequently attack girls’ schools, usually when the buildings are empty in the evening or during the holidays.

Last October the Taliban shot schoolgirl activist Malala Yousafzai in the head in Swat valley. She has largely recovered and now lives in England, where she is enrolled at a private school and has become a global icon for children campaigning for the right to an education.

Separately unidentified gunmen on a motorbike fired Thursday at a NATO supply truck in Peshawar and wounded two people, police said. The attack took place near Karkhano market on the edge of Peshawar and close to the Khyber tribal district where Islamist militants are active.

“Two people were wounded in firing on a NATO truck which was carrying military vehicles from Afghanistan to Karachi,” said local police official Daud Khan.

The Khyber district straddles the NATO supply line used by U.S.-led troops to evacuate military equipment ahead of their 2014 withdrawal from Afghanistan.