Girls Who Run the World 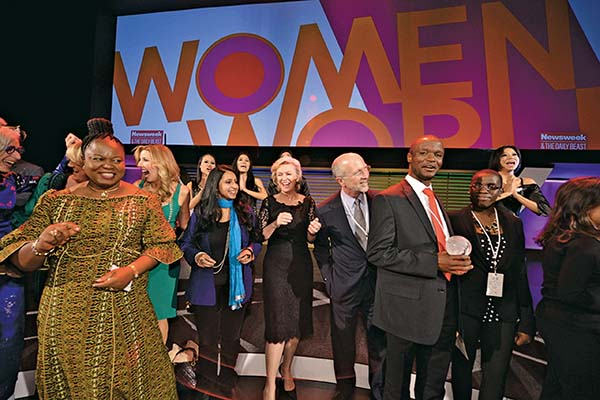 From Pakistan to Syria, young women press for change.

[dropcap]H[/dropcap]umaira Bachal was just a teenager when she looked around her impoverished Karachi neighborhood at the children roaming the barren streets, and realized that she and her sister were the only ones who were going to school. Bachal’s mother was making sure her daughters got an education, against their father’s wishes. When the father discovered Humaira was going to take a high-school entrance exam, he beat her mother. He also beat her. She took the exam anyway. And then, determined to improve the number of girls completing a primary education in Pakistan—some 59 percent—Bachal started teaching a handful of local children in her home.

A decade later, Bachal was sitting on stage in an ornate theater at Lincoln Center in New York, talking about the 1,200-student school she runs in a gang-ridden part of Karachi through the Dream Foundation Trust, which she also created.

Bachal “doesn’t take any nonsense. And the [local] men respect that,” says Sharmeen Obaid Chinoy, who made a movie featuring the Pakistani activist and who was also on stage for the fourth annual Women in the World Summit hosted by Newsweek and The Daily Beast earlier this month.

Bachal along with her fellow Pakistani panelist Khalida Brohi, founder and director of the Sughar Women’s Program, and Malala Yousafzai all began their education activism as teenagers. Bachal and Brohi represented a major thread woven through the 2013 summit: the promise of the rising generation of young women activists, entrepreneurs, and leaders.

Call it the girls-who-change-the-world summit. Of course there were many veteran activists among the featured delegates, but there was also a sense that the current crop of tech-savvy young women may be able to change women’s education and labor-force participation even more quickly and decisively than their immediate predecessors. As former U.S. secretary of State Hillary Clinton put it in her address: “Much of our advocacy is a top-down frame. It’s past time to embrace a 21st-century approach to advancing the opportunities of women and girls” by empowering youthful, grassroots leaders.

While Bachal and Brohi spoke directly about the value of educating a new generation of young Pakistani women, they weren’t alone in emphasizing how pivotal gains in education are going to be for women in the developing world. Oprah Winfrey interviewed Dr. Tererai Trent, founder of the Tinogona Foundation, who was married off at 11 in her Zimbabwe village and then brought her family to America and managed to get a Ph.D. while handling five kids and an abusive husband in the confines of a small Oklahoma trailer. Only then did she return to Zimbabwe to improve educational opportunities for rural children.

There is worldwide work that needs to be done on this front. Some 250 million children of primary school age—about 38 percent—cannot read or count; and the majority of these children are girls. Even in countries where they have reached gender parity at the national level, there are still massive gender gaps in education among the poor and ethnic minorities, the World Bank notes. According to their statistics, two thirds of unschooled girls around the world are part of ethnic minority groups in their home country. In India and Pakistan, the richest boys and girls are educated equally, while the poorest 20 percent of boys get five more years of education than girls do. The global economy will benefit greatly from the education of these typically disenfranchised women.

Melanne Verveer, former U.S. ambassador for global women’s issues, pointed out that “women are the third emerging economy in the world, after China and India,” worth trillions of dollars. But those estimates rely on women participating in the market, something which happens with far more frequency when they are educated. In Latin America the increased levels of education among girls accounts for 42 percent of the growth in the female labor force since 1975.

In India and Pakistan, the richest boys and girls are educated equally, while the poorest 20 percent of boys get five more years of education than girls.

Though women in the United States now get the majority of both college and graduate degrees, they are sorely underrepresented in science, technology, engineering, and mathematics—known in the jargon as STEM. In fact, they’ve lost ground in the past decade. As the summit’s “Grooming Titans of Tech” panel moderator Chelsea Clinton pointed out, the number of female computer-science majors has dropped from 20 to 12 percent in the past decade. Reshma Saujani, the founder of the organization Girls Who Code, a nonprofit that teaches underprivileged teens how to code in computer-science languages, is looking to change those dreadful numbers. Saujani bragged to the summit audience about how evangelical her first group of graduates is: they teach their friends what they learn in their coding classes.

While throughout the world very young women are lagging behind men in tech fields, they are making enormous contributions through grassroots social-media activism. This is a huge shift from previous generations, when the face of most revolutionary movements was male. Though Internet use in emerging markets is difficult to track, marketing research firm eMarketer predicts that by 2014, 1.8 billion people will use social networking, with the fastest growth coming from the Middle East and Africa. By using this technology, women can have a voice in patriarchal societies where demonstrating publicly can lead to sexual violence and even death.

Alaa Murabit, a 23-year-old Libyan activist and medical student who spoke to 60 Minutes’s Lesley Stahl at the summit, followed just this path. With her Voice of Libyan Women, which advocates for women’s economic empowerment and against domestic violence, she reaches Libyan women through the organization’s website, Facebook, Twitter, and YouTube presence. Part of what she seeks to accomplish with her NGO is to make sure that women get a seat at the table when her country redrafts its Constitution, a process in its early stages. Getting young women more involved in political leadership isn’t just a problem in post-revolutionary countries. There is only one country in the world that has a majority female legislative body: Rwanda. A small handful of nations have near gender parity in their elected leaders, but most languish far behind, including the U.S., where representation in Congress is around 20 percent.

Similar progress is needed in private-sector leadership as well. Less than 5 percent of Fortune 500 companies are run by women. It will take time to raise those kinds of numbers. But there’s one thing young women will need to get there, and it is a quality that Humaira Bachal and all the other millennials at the summit shared: the confidence to “not take any nonsense.” As these young women are discovering, just because a door is closed, it doesn’t mean you can’t open it yourself.

Qandeel Baloch’s Brother ‘Not Embarrassed’ of Killing Her