Home Opinion Give Ahmadis the Right to Vote Too, Mr. Zardari

Give Ahmadis the Right to Vote Too, Mr. Zardari 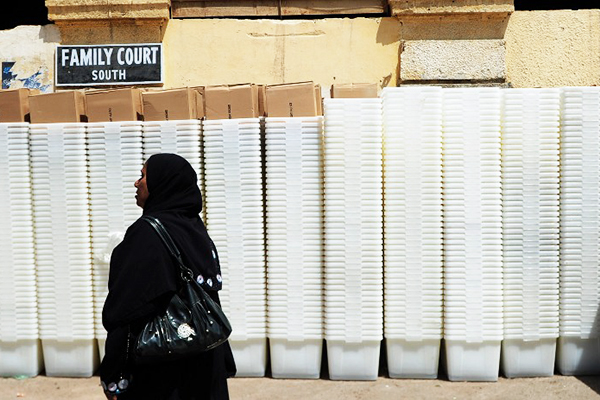 Pakistanis will seize their moment in history when they go to the polls tomorrow. Well, almost all Pakistanis will. Some four million Ahmadis, representing about 5 percent of the electorate, are not allowed to cast their ballots unless they declare themselves non-Muslims first. This violates the principles of free speech and expression that are the bedrock of truly democratic societies.

Not since Nelson Mandela came to power in post-apartheid South Africa’s first multiracial elections has a nation with so much potential to correct course and right itself done so much to repress a contributing segment of society with discrimination, religiously-motivated violence, and politically-motivated exclusion.

In the run-up to this weekend’s historic vote, 32 members of the U.S. Congress, as well as the Senate minority leader and minority whip, have taken note of this gaping inequity that excludes Ahmadis from their right to freely cast ballots. These leaders called on Secretary of State John Kerry to press Asif Ali Zardari, Pakistan’s president, to repeal discriminatory executive orders held over from the era of Gen. Pervez Musharraf.

“Pakistan’s electoral system discriminates on the basis of religion, rendering the promise of free and fair elections a sham,” reads the Congressional letter sponsored by Rep. Frank Wolf. “Not only are matters of conscience wholly irrelevant to the exercise of this fundamental right of citizenship, but for Pakistan’s four million Ahmadis, this requirement [of filling out a form declaring themselves non-Muslims] blocks their right to vote. Moreover, pursuant to Pakistani Presidential Order No. 15 of 2002, Ahmadis are uniquely excluded from the joint electoral rolls and required to be registered on a separate supplementary voter roll.”

If Pakistanis can weather Taliban violence aimed at disrupting their right to go out and vote, if the kidnapping and murder of parliamentary candidates can be tolerated, if the inspiration of stories like Malala Yousafzai’s can bring out the youth in unprecedented numbers to have their growing voice heard, if women can muster the courage to cast ballots in large numbers so tomorrow’s society is dominated by educated mothers who steer their sons away from fanaticism’s scourge, why then can’t Pakistan allow Ahmadis to vote without forcing them to violate their consciences? What is Pakistan so afraid of?

Ahmadis are like America’s Latinos in the 2012 elections in terms of their potential to impact the vote. Educated and reformist, they represent a clear and present danger to the manipulative schemes of Pakistan’s coalitions of the corrupted. They are being excluded because of their ability to mobilize and to swing voting results, not because of their “heretical” beliefs.

Educated and reformist, Ahmadis represent a clear and present danger to the manipulative schemes of Pakistan’s coalitions of the corrupted.

Pre-election opinion surveys demonstrate a key point about the value of vote banks. In order for one of the three main parties—Pakistan Muslim League (Nawaz), Pakistan Tehreek-e-Insaf, Pakistan Peoples Party—to win a simple majority, it needs 137 of the 272 directly-elected National Assembly seats. Nawaz Sharif reckons he can muster up between 110 and 126 seats. Whether Imran Khan can admit their value or not, his party, running a not-too-distant second to PMLN, would become the leading coalition candidate if the Ahmadi bloc could vote freely and decided to support PTI candidates. Sharif, whose normal coalition partners are conservative religious parties, doesn’t want Ahmadis breaking for Khan.

Then, there’s Zardari. Having to deal with the legacy of his government’s dismal performance, he knows his party has little chance to win much more than third place. By throwing whatever support his PPP is able to muster behind Sharif, he might pragmatically offer a coalition of the unlikeliest in order to retain the presidency—and its immunity from prosecution—in order to avoid the wrath of an activist Supreme Court. Clearly, he would have no interest in allowing Ahmadis to vote.

In his State of the Union address, President Barack Obama said “America must remain a beacon to all who seek freedom … We must all do our part to make sure our God-given rights are protected … that includes one of the most fundamental rights of a democracy, the right to vote.” There is no better way for the American president to demonstrate that commitment than to publicly call on President Zardari, even at this late hour, to revoke Executive Order No. 15 so that Ahmadis have the right to vote freely and fairly on Saturday.

Democracy, in its truest form, requires the participation of every eligible person. Elections, in their fairest light, demand of society that all voters are treated equally. Zardari, with the stroke of a pen, made it possible for all overseas Pakistanis, numbering some six million now, to vote in future elections. His bold move showed he has the capacity to take constructive initiative within the democratic context when it suits his interests.

But democracy is about more than self-interest. If he is a man true to the democratic beliefs held by his slain wife under the banner of the party her father created, Zardari must also repeal the discriminatory law that prevents his Ahmadi citizens from voting. This one act could still be the defining legacy of his tarnished presidency, and raise the hope that a truly democratic Pakistan in the vision that Jinnah gave his life for can exist and flourish long into the future.

Ijaz is a U.S. citizen and negotiated the release of 96 Ahmadi refugees from the Immigration Detention Center in Bangkok in June 2011, the vast majority of whom were granted permission to resettle in the United States.

As a citizen of a country, all the constituents should have the right to vote PERIOD!!!!
That is a no brainer..

Pakistani Government… Please give that right to ALL your citizens!!

I pray that our country (U.S) honor the principles of democracy and religious freedom for all in urging Pakistani government to allow Ahmadi Muslims to vote in tomorrow’s elections.

Could we get some citations on the “4 million” figure? Jibran Nasir in an earlier message referred to the Ahmadi population of Pakistan being 400,000. How are we off by an order of magnitude?

Shameful that these people who are so peaceful are treated so unfairly.