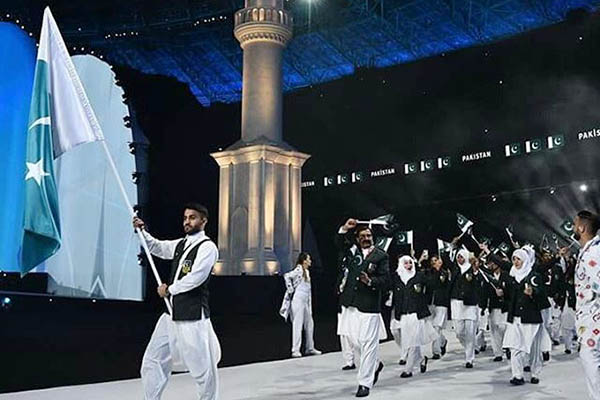 The fourth edition of the Games plays up a theme of togetherness in the Islamic world and features 2,800 athletes

The 2017 Islamic Solidarity Games were officially opened by Azerbaijani President Ilham Aliyev during a spectacular ceremony in the Baku Olympic Stadium on Friday night.

Pyrotechnics, dancers, musicians and even 40 horses, camels and donkeys featured as the fourth edition of the Solidarity Games made its bow in fine style. The show unsurprisingly followed a theme of togetherness in the Islamic world, as the 40-day long ‘journey from the Caspian’ came to its conclusion.

All the teams were led out by women carrying water collected from around Azerbaijan, which formed a large fountain when poured into a bowl. The introduction of the 2,800 athletes was followed by the story of a young girl called Mina, who explored the world with a kite while looking to spread peace and harmony.

The ceremony was finished off by a firework display, with the word ‘Baku’ being formed above the stadium. “We are very honored to host the Games,” said Azerbaijani Vice President Mehriban Aliyeva as she addressed the crowd. “Today Azerbaijan welcomes the entire Islamic world. The Baku Islamic Solidarity Games are a bright, new chapter in Azerbaijan’s dynamic development. We can all be proud of what we have accomplished together. Our Games will send a message beyond the borders of Azerbaijan, that solidarity is our strength.”

After the entrance of President Aliyev, the Azerbaijani flag was raised during the national anthem to fantastic acclaim from the capacity crowd in the country’s largest arena. It is no secret that Baku hopes to host the Olympics in the near future, and with the expense put into this opening ceremony it could have easily been mistaken for the world’s biggest multisport event.

The projection screen was 85 meters high, on a backdrop that took six weeks to build and was made from six kilometers of fabric. Over 300 speakers and 12 kilometers worth of cables brought constant music and life to the stadium, while over 1,000 lighting fixtures were used.

More than 5,000 people from 31 different countries worked on the ceremony, including 2,200 local volunteer performers. After the highlights of ‘the journey from the Caspian’ were shown on the screen, Afghanistan began the athletes’ parade.

Like in the Olympics, the countries came out in alphabetical order, before Azerbaijan completed the parade with five-time world karate champion Rafael Agayev as flag bearer. The home country has the second-biggest delegation of 335 athletes, 10 less than near neighbors and traditional good friends Turkey, who received an excellent reception.

African nation Niger sent just two competitors to the Games, the smallest outfit of the 54 taking part in the capital. Agayev and Azerbaijan walked into the middle of the stadium to a cacophony of noise, before the Islamic Solidarity Sports Federation (ISSF) flag was raised.

After the official speeches, Aliyev declared the Games open, four days after the first action in the football tournament.

The ceremony moved on to the story of Mina, as she traveled with her kite through 10 ‘creative segments’ focusing on various subjects, including harmony, inspiration and peace.

The last two editions of the Games were blighted by controversy and problems, after Iran cancelled the 2009 Games because of an argument with Arabic countries over the use of the term ‘Persian Gulf’ and Indonesia was forced to change the 2013 host city twice after a corruption scandal. But Baku had none of those difficulties in preparing to take the next step in proving that it could host the Olympics in the near future, after two previous failed bids to become a candidate city. And the opening ceremony passed without a hitch, as Azerbaijan welcomed the Islamic world to its capital amid 150 kilograms of confetti.