Glitz and Glamor at Launch of Indian Football League 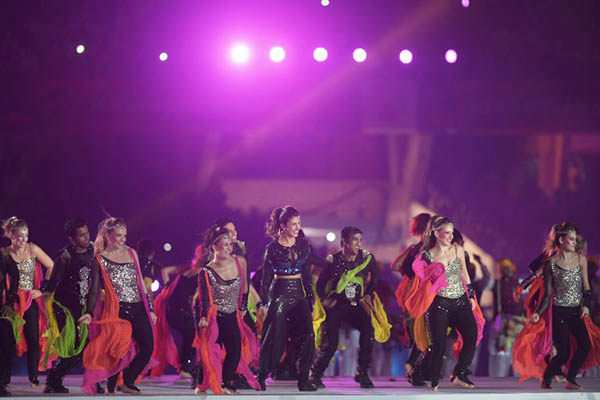 Organizers hope the sport will eventually become as popular as cricket though experts predict an uphill battle.

India’s new football league kicked off Sunday with a spirited clash and a glitzy pyrotechnic opening ceremony that organizers hope will ignite the country’s passion for the “beautiful game.”

Atletico de Kolkata trounced Mumbai City 3-0 in the first match of the Indian Super League (ISL), which has lured former international stars such as Spain’s Luis Garcia and France’s Nicolas Anelka out of retirement.

Cricketing hero Sourav Ganguly said the league was the beginning of something great, arguing there was room for football in the cricket-obsessed country of 1.25 billion people. “It may not be cricket but it will be the next biggest sport,” said Ganguly, co-owner of Kolkata, just ahead of kick-off. “Everybody will be pleasantly surprised as the tournament goes on,” the former national captain said.

He conceded the international veterans fronting the eight teams are “not the current stars of football,” but predicted the league would eventually attract the best in the game. “Obviously they are not the current stars, that will happen over time. It’s the beginning of something.”

Former Ethiopian captain Fikru Lemessa, 28, scored in the first half, while 33-year-old Spaniard Borja Fernandez hit the net in the second, sending the home crowd at Salt Lake stadium into raptures. Spain’s Arnal Carbo sealed the win with a goal in stoppage time. “It was incredible. A lot of people and so many of them pushed, pushed us,” Fernandez said of the crowd.

Organizers hope the city-based franchises, each with a famous, if ageing, frontman and modeled on cricket’s glamorous Indian Premier League, will bolster popularity for the sport during the 10-week competition.

Cricketing greats such as Sachin Tendulkar and Bollywood A-listers are co-owners of the teams along with Spanish La Liga side Atletico Madrid.

Rupert Murdoch’s Star TV is showing the tournament, which is being backed by sports management giant IMG.

Mamata Banerjee, chief minister of West Bengal of which Kolkata is the capital, was front row, chatting to Indian billionaire Mukesh Ambani who is bankrolling the league, and Bollywood icon Amitabh Bachchan. Some 70,000 tickets were sold for the match, according to organizers, but pockets of the stadium were empty.

S. Bardhan, a soldier stationed at Kolkata airport, said he “loved football” although this was the first time he had ever seen a match live. “I watch [international leagues] all the time on TV,” said Bardhan, whose wife and two-year-old son also came along.

The crowd roared with approval during the ceremony as Bollywood actress Priyanka Chopra introduced Tendulkar.

The two coaches had pledged to “deliver the goods” for the opener even though Mumbai were missing their star players. Ex-Arsenal midfielder Freddie Ljungberg of Sweden, the 37-year-old poster boy for Mumbai, was ruled out with a calf injury. Mumbai were also missing Anelka, 35, as he serves a ban for a controversial “quenelle” goal celebration in late 2013, which also got him the sack from West Bromwich Albion. He has denied the gesture was racist.

Mumbai manager Peter Reid said he had “no excuses” for the loss, saying “the better team won on the day.”

“We didn’t deserve it, it happens in football,” the former Sunderland and Manchester City boss said.

Experts say the ambitious ISL faces an uphill battle to convert India’s cricket-mad population and develop the country’s existing pockets of passion for football. On a visit to India in 2007, FIFA president Sepp Blatter said India was the “sleeping giant” of world football.

But its national side languishes at 158 in the world rankings, which experts blame on sports authorities’ failure to develop training grounds and young players.

Reid, however, was optimistic about the future. “There’s room enough for two brilliant sports in this sports-mad country,” he said ahead of the match.