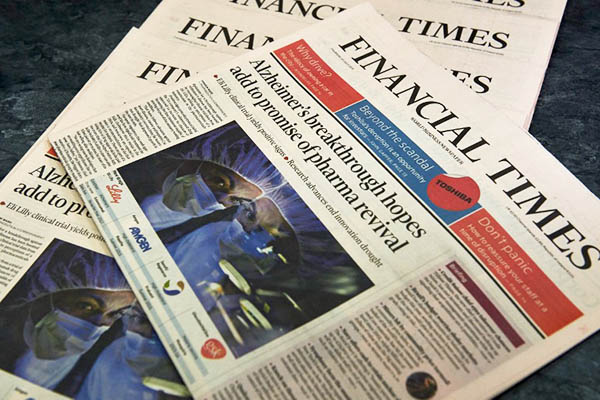 A look at the history of British daily ‘Financial Times’ following its sale to the Japanese Nikkei group.

The Financial Times, whose sale to Japanese group Nikkei was announced Thursday, is the go-to paper for the business world which has harnessed the Internet to become a truly international newspaper.

The British daily, with its distinctive pink paper, started life in 1888 as a four-page publication targeting London’s financial industry, but now reaches more than two million people each day around the world. An unashamed champion of free markets and a supporter of the European Union, the FT is known for the reliability of its news and its insightful analysis—even if it has rowed back on previous calls for Britain to adopt the euro.

Such is the newspaper’s influence that during the crisis over Greece’s debt, a string of scoops drove not just the news, but arguably also the hand of European officials.

“The FT is the premier business newspaper in the world, with a global reach that exceeds its main rival, the Wall Street Journal,” said Steve Schifferes, financial journalism professor at London’s City University. “Its strength lies in its excellent sources and strong commentary and analysis, which covers both markets and economic and political developments.”

Most readers now come through newspaper’s website, FT.com, which launched in 1995 and was among the first to charge for content by introducing a paywall in 2001. Digital subscriptions now account for 70 percent of the total circulation of 720,000.

The newspaper’s founding motto was to be a friend to the “Honest Financier” and the “Respectable Broker”, and by the 1920s it had become known as the “Stockbroker’s bible.” In 1945 the paper merged with the less successful Financial News and in 1957 was acquired by its current owner, Pearson, which invested in a global and digital expansion.

The FT’s salmon pink pages—a marketing gimmick dating back to 1893—are nowadays filled with business, financial, economic and political news and comment. The paper employs about 2,000 people, 600 of them working in editorial, and has maintained a network of foreign reporters where most of their rivals have cut overseas staff.

In 1979, the European edition started printing in Frankfurt and the newspaper is now produced all over the world, including in New York, Tokyo, Hong Kong and Dubai. Since 1998, it has sold more copies overseas than in Britain, although it has struggled in the United States and a German language version closed in 2012.

The paper is published Monday to Saturday and there are five regional editions—the U.K., Europe, U.S., Asia and Middle East—and a Chinese version.

In an age of widespread free content, the FT insists that quality journalism must be paid for and it has built up a high-value subscription base that attracts advertisers.

Reading it is not cheap, costing £13.50 a week for the print and online editions in Britain, $11.77 in the United States, 19.55 euros in Germany and HK$100.54 in Hong Kong. But much can be derived about the newspaper’s target audience by the luxury lifestyle showcased in its monthly magazine How to Spend It.