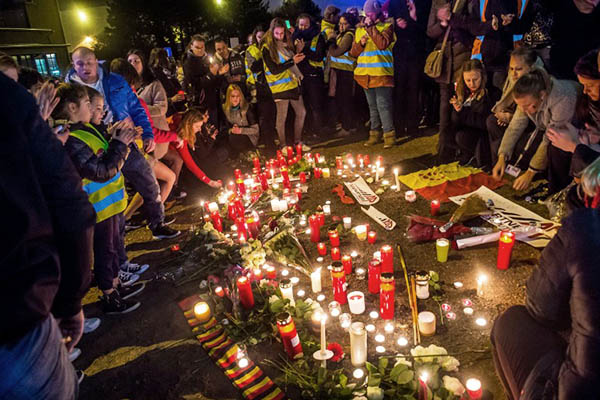 They came from Peru or Morocco, from North America or Europe, and their lives—as parent, Eurocrat, sportsman or missionary—were just as diverse. That is the emerging picture of the hundreds of people fated to be killed or wounded in the triple bomb attack in Brussels on Tuesday.

Belgian Foreign Minister Didier Reynders told Belgian television RTBF that there were around 40 nationalities among the dead and wounded. They included citizens of Britain, Colombia, Ecuador, France, Portugal and the United States, as well as three to four staff from the E.U.’s executive arm, the European Commission.

The broad range of nationalities reflects the cosmopolitan nature of Brussels—home to many migrants to Belgium as well as the institutional capital of the 28-nation European Union. Among the first fatalities to be named was a Peruvian woman, Adelma Marina Tapia Ruiz, who had been living in Belgium for six years and was traveling with her journalist husband and young twin daughters.

One of their daughters was wounded by flying debris in one of two blasts at Brussels’ Zaventem airport.

“They took away everything she wanted to do with her life,” her brother Fernando Tapia told Peruvian media, after she was identified by the foreign ministry in Lima.

A Moroccan woman was also killed in a third blast at a metro train at a station close to the European Union’s institutional hub, according to the Moroccan news agency MAP. According to an ongoing toll provided by the Belgian health ministry, 31 people were killed and 270 were injured.

It was the bloodiest terror assault in Belgium’s history.

French Prime Minister Manuel Valls on Wednesday said 10 French nationals had been injured, four of them seriously. In London, Downing Street said one British national was missing and four were injured, three of whom were being treated in hospital.

Officers from the Belgian federal police’s disaster victim identification team were working at the sites of both attacks, poring over the remains in a grisly process to identify the casualties.

Mason Wells, 19, was one of three U.S. missionaries from Utah who were seriously wounded in the blasts at the airport, the Church of Jesus Christ of Latter-day Saints said in a statement. U.S. media reports said that in a dark twist of fate, Wells had a similarly close call three years ago while in Boston accompanying his mother who was running the marathon. The event was the target of a terror attack that killed three and wounded scores more.

NBC News, quoting Wells’ family, said he was also in Paris in November when the French capital was rocked by a series of attacks. Wells “has burns to his hands and legs and some to his face,” a family friend, Lloyd Coleman, told Utah’s Deseret News daily.

The U.S. Air Force also said one of its service members and several of his relatives were also injured. Basketball player Sebastien Bellin, who was pictured lying on the airport floor covered in blood, has had surgery, his father, Jean Bellin, told CNN. “He is obviously stunned. The first words out of his mouth were ‘You wouldn’t believe the carnage I saw around’,” the father said.