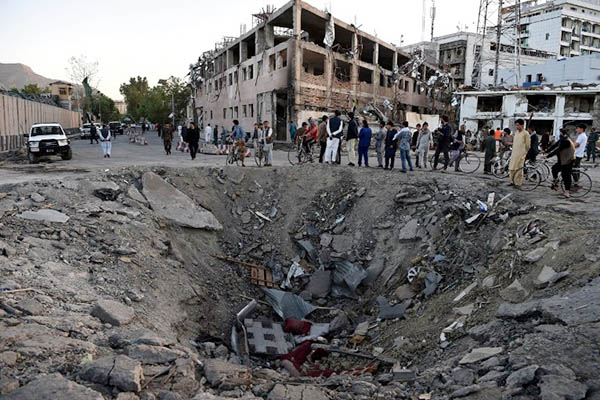 Afghan intelligence has blamed the Haqqani Network for attack that left 90 dead, but no group has claimed formal responsibility

U.S. President Donald Trump has condemned the “barbaric” truck-bombing in Kabul in a phone call with his Afghan counterpart, as global outrage swells over the massive blast that ripped through the diplomatic quarter, killing at least 90 and injuring hundreds.

No group has so far claimed the attack, launched from a sewage tanker packed with explosives, which tore a massive crater in the ground and blew out windows across the heavily fortified district. Anguished residents were preparing to bury their loved ones on Thursday, as authorities continued to clear the mangled wreckage of cars and debris from around the blast site.

Trump called President Ashraf Ghani to convey his condolences, saying the timing of the attack during the holy month of Ramzan underscores “the barbaric nature of the terrorists who are enemies of all civilized peoples.”

“He also commended Afghan security forces for their steadfast efforts to defend the Afghan people from enemies who would seek to deny them the security and prosperity they so richly deserve,” the White House said.

The attack underscores spiraling insecurity in Afghanistan where the NATO-backed military, beset by soaring casualties and desertions, is struggling to beat back insurgents. Ghani slammed the bombing, the deadliest single attack in Kabul since the Taliban were toppled from power in a 2001 U.S.-led invasion, as a “war crime.”

The explosion damaged several embassies in the area, which houses diplomatic and government buildings and is a maze of concrete blast walls, vehicle barriers and armed security guards. At least 11 Afghan guards working for the U.S. embassy were among those killed and 11 American citizens working as contractors in Kabul were among the wounded, U.S. officials said

German Foreign Minister Sigmar Gabriel said the “despicable” attack had happened “in the immediate vicinity” of the German embassy and that an Afghan guard had also been killed.

France, India, Turkey, Japan, the United Arab Emirates and Bulgaria also reported damage to their missions, including shattered windows, as the blast drew an avalanche of international condemnation.

U.N. Secretary-General Antonio Guterres expressed his “abhorrence” at the strike, which he said underlined the urgency of the fight against terrorism and violent extremism.

The lights at the Eiffel Tower were switched off on Wednesday night to honor the scores of victims. The monument’s lights had already been turned off on Tuesday after suicide blasts in Baghdad killed at least 42.

The sound of the bomb, which went off near Kabul’s busy Zanbaq Square, reverberated across the Afghan capital, with residents comparing it to an earthquake. Most victims appear to be civilians. “They were going to their work like any other day and now they are lost,” a young Afghan man said of his missing uncle and cousins, sobbing quietly outside Kabul’s Emergency hospital. “I have searched in three hospitals and haven’t found them.”

Afghanistan’s intelligence agency blamed the Taliban-allied Haqqani Network for the attack. The Taliban—currently in the midst of their annual “spring offensive”—denied they were involved, while strongly condemning the blast. The insurgent group rarely claims responsibility for attacks that kill large numbers of civilians. The Islamic State group has claimed responsibility for several recent bombings in the Afghan capital, including a powerful blast targeting a NATO convoy that killed eight people earlier this month.

Amnesty International said the bombing shows that the conflict in Afghanistan is “dangerously widening in a way that should alarm the international community.”

Wednesday’s blast was the latest in a string of attacks in Kabul. The province surrounding the capital had the highest number of casualties in the country in the first three months of 2017 due to multiple attacks in the city, with civilians bearing the brunt of the violence. Afghan troops are backed by U.S. and NATO forces, and the White House is considering sending thousands more soldiers to break the deadlock in the battle against the Taliban.

U.S. troops in Afghanistan number about 8,400 now, and there are another 5,000 from NATO allies. They mainly serve in an advisory capacity—a far cry from the U.S. presence of more than 100,000 six years ago.