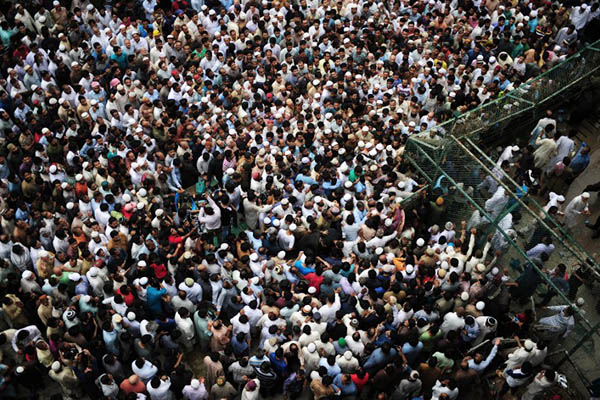 A gloomy Pakistan on Saturday bade farewell to its national hero Abdul Sattar Edhi, the founder of the country’s largest welfare organization who died Friday in Karachi aged 88.

Edhi, whose death was confirmed by his son Faisal, was revered for setting up maternity wards, morgues, orphanages, shelters and homes for the elderly, picking up where limited government-run services fell short.

Prime Minister Nawaz Sharif announced a state funeral and day of national mourning in honor of the man who owned just two sets of clothes, but whose work uplifting the nation’s destitute and orphans cemented his place in the hearts of Pakistan’s masses. Edhi, known as a “servant of humanity” and who also ran the world’s largest private ambulance network, was suffering from severe kidney problems according to his son.

Among those to attend the funeral was President Mamnoon Hussain, military chief General Raheel Sharif, governor of Sindh province Ishrat-ul-Ibad Khan, the chief ministers of Sindh and Punjab provinces and many other national politicians, notables and servicemen.

Edhi’s coffin, wrapped in the green national flag and covered with pink rose-petals, was carried on a military jeep into the national stadium in Karachi where there was a guard of honor as thousands paid tribute. Security officials said that a 21-gun salute was also offered.

Military Chief Gen. Raheel Sharif and Edhi’s son Faisal saluted the coffin as it was carried by soldiers. But thousands of ordinary people who planned to attend the funeral were stopped several kilometers away from the ceremony for security reasons.

More than 3,000 security and traffic police officers were deployed as the coffin was taken for burial to Edhi Village near Karachi’s main National Highway, which Edhi himself had selected as a place for his grave 25 years ago.

Born to a family of Muslim traders in Gujarat in British India, Edhi arrived in Pakistan after its bloody creation in 1947. The state’s failure to help his struggling family care for his paralyzed mother was his painful and decisive turning point toward philanthropy.

In the sticky streets in the heart of Karachi, Edhi, full of idealism and hope, opened his first medical clinic in 1951. Abandoned children and the elderly, battered women, the disabled, drug addicts; Edhi’s foundation now houses some 5,700 people in 17 shelters across the country.

The most prominent symbols of the foundation—its 1,500 ambulances—are deployed with unusual efficiency to the scene of extremist attacks that tear through Pakistan with devastating regularity. The foundation’s adoption service sees unwanted children—many of them girls—left in cradles placed in front of every center, where they can be safely cared for.

Edhi has been nominated several times for the Nobel Peace Prize, and appears on the list again this year—put there by Malala Yousafzai, Pakistan’s teenage Nobel laureate.

Frail and weak in his later years, he appointed his son Faisal as managing trustee in early 2016. Edhi leaves behind his wife Bilquis and six children.

He gave until the very end, his son told AFP, seeking to donate all his body organs after death—though doctors said that due to his age he could only donate his corneas.

Children would run after him, to hold his hand and for small talk whenever he would visit the Edhi village. He would refrain from taking showers to save water.

“We have to conserve water for our future generations and that is why I don’t misuse this precious gift of nature,” he told AFP in an earlier conversation.

During his last days and as his condition worsened, he refused offers to get medical treatment from abroad.

The last time Pakistan held a state funeral was for military dictator General Zia-ul-Haq in 1988.

I attended the Janaza. Reached the venue ato 1300 hrs and was inside within 20 minutes. People kept coming in even tI’ll the time prayers started. I don’t think security can be blamed for people being stopped. I made it easily. People on social media are portraying a twisted impression about the arrangements. Those who wanted to be there; reached without much hassle.