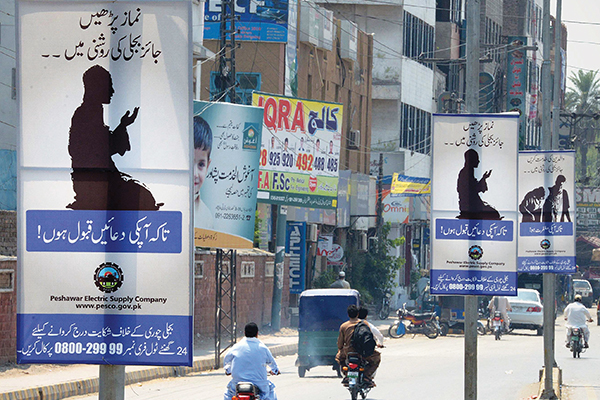 In a bid to reduce power theft, the Peshawar Electric Supply Company has launched a new campaign to appeal to its customers’ religious consciences. “Say your prayers in the light from legal electricity so that your wishes can come true,” read banners the company put up this month in the provincial capital. “Do your fasting, pay [charity], and serve your parents, but do these things by the light of legal electricity,” intones one of its newspaper advertisements. “Clerics have ruled that doing good deeds by the light of stolen electricity is against Shariah, so let us stop using stolen electricity and beautify our Day of Judgment,” says another. The campaign is not likely to work because many people in Khyber-Pakhtunkhwa province and the adjacent federally-administered tribal areas believe free electricity is their right. Tribal representatives say this much was promised by Pakistan’s founder, Jinnah, when their forebears acquiesced to the construction of Warsak dam. Some 20 percent of all electricity Pakistan produces is stolen, making worse an already bleak situation that forces outages of up to 20 hours a day across the country.