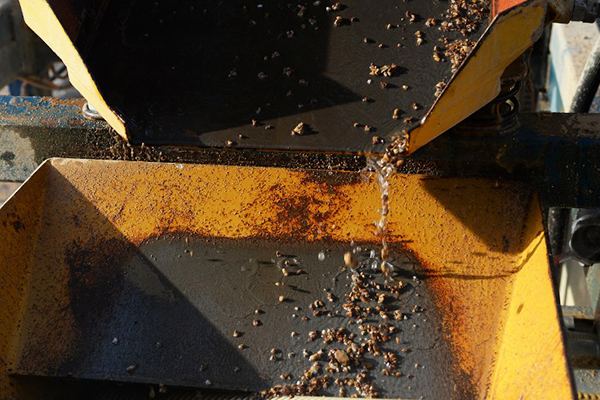 A U.S. survey found evidence of $1 trillion of minerals deposits.

After scrambling up a steep mountainside in north Afghanistan, Morad Ali crouches beside a gap cut in the slope and touches some reddish-brown rock. “The gold is in here,” he says.

Ali was one of generations of local men who used chisels and pickaxes to extract small amounts of gold from the forbidding peaks above the village of Qara Zaghan on the edge of the Hindu Kush Mountains. Now a dirt track has been carved up to the spot, and professional surveying is underway as part of efforts to assess how Afghanistan’s vast mineral wealth could be exploited as the country seeks a more stable and prosperous future.

“I started mining when I was about 12,” said Ali, now in his late thirties. “We would find tiny flakes of gold, or we would crush rocks and then wash the powder to pan out little grains.” Ali’s knowledge of the landscape and its history of small-scale “artisanal” mining is a valuable asset for Afghan Gold and Minerals, the Afghan-owned company that in 2011 won the license to dig for gold in Qara Zaghan.

“We know from the locals that there is gold and our own studies show good potential—now we need to explore further,” said Dusko Ljubojevic, a South African geologist working for Afghan Gold and Minerals. “Doing the surveying on this type of terrain is like mountaineering, but I am excited. We have only looked at a small part of our license area so far.”

Any business venture faces major challenges in Afghanistan, ranging from the risk of attack by the Taliban and criminal gangs to poor infrastructure, power shortages, and widespread corruption. Rumors of a “gold rush” attract inevitable attention, and Afghan Gold and Minerals’ convoys use armored vehicles and gun-toting guards to make the eight-hour journey to Baghlan province from Kabul over the snow-capped Salang Pass.

Afghan Gold and Minerals is majority-owned by Sadat Nadari, a 36-year-old Afghan entrepreneur who runs a supermarket chain and insurance company in the capital as well as investing in construction, telecoms, and fuel distribution.

From a prominent Ismaili family, Nadari exemplifies the sleek, foreign-educated business class that could flee Afghanistan when U.S.-led troops pull out in 2014, but he says he is determined to stay and to invest. “I will always live and work in Afghanistan,” he said at his large top-floor office in Kabul. “Mining is Afghanistan’s future. If there is one sector that can take this country forward and make a difference, it is mining. We are at the exploration stage in Qara Zaghan. We are hoping to find a commercially viable deposit, then get into production, start paying our shareholders, and generate revenue for the government of Afghanistan.”

Reflecting how big business is done in the country, Afghan Gold and Minerals was formed after Nadari “bumped into” Ian Hannam, then a JP Morgan banker with a legendary reputation for deal-making, at a cocktail party at the American Embassy. “I said I owned a small gold mine and I could see his facial reaction,” Nadari recalled with a laugh.

JP Morgan then created a consortium of investors to take 49 percent ownership of Afghan Gold and Minerals, which has since secured six other mining licenses across Afghanistan: four gold concessions in Badakhshan and two copper ones in the mid-north.

The U.S. conducted an aerial survey of Afghanistan in 2006, building on data from the Soviet occupation of the 1980s, and found evidence of $1 trillion of minerals deposits with particularly strong results for copper and iron. Such potential wealth offers a glimmer of hope to a country ravaged by decades of war and facing further turmoil as 100,000 international troops fighting the Islamist insurgents head home by the end of next year.

“Afghanistan is blessed to sit on such large deposits but unless we are able to explore them, it is worthless,” said Nadari. “That is why we need international partners, expertise, and capital.”

The government is also counting on commercial mining as a future source of much-needed income, and a new mining law is due to be passed soon to regulate the industry and encourage investment. But the legislation is stuck in several drafting stages and it has no date to go before Parliament after long delays and disputes between competing ministries. More setbacks could even push the bill beyond elections next April, when President Hamid Karzai is due to step down after 12 years in power and Afghanistan looks set for a period of political uncertainty.

Any chance that Qara Zaghan and other mines will come to Afghanistan’s economic rescue depends on whether ordinary people benefit from an industry often criticized for greed, environmental destruction and lack of transparency.

Afghan Gold and Minerals tackles such criticism by saying it meets international accountability standards, as well as running a training scheme for young geologists, funding village development program, and filling almost all jobs with local recruits.

For old hands such as Amir Mohammad Mosazai, a professor of mining at Kabul Polytechnic who worked under the Soviets and was sacked during the Taliban regime, Afghans should not yet dream of striking it rich. “Perhaps mining could be for Afghanistan like oil is for Arab countries,” he said. “But this is a very expensive business and the country needs security first.”