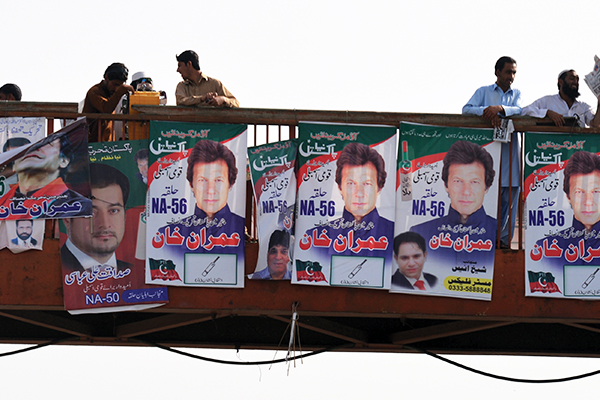 Imran Khan is not a heretic. That’s the message his Pakistan Tehreek-e-Insaf party conveyed with righteous rage on May 2 after a video showed one of his supporters asking the London-based chief of the stigmatized Ahmadi community—who consider themselves Muslims, but aren’t under Pakistani law—to support Khan’s bid for power in the May 11 elections. “This is a political conspiracy against me,” Khan thundered, gratuitously expressing his firm faith in the finality of Islam’s Prophet. “If you say that when the PTI comes to power it will amend the Constitution with regards to the Ahmadis, it is propaganda.” Khan suggested that his old tormentor Maulana Fazlur Rehman, chief of his own eponymous faction of the Jamiat Ulema-e-Islam, was behind what he saw as a political and personal smirch. Rehman has, of course, previously accused Khan of being in thrall to the “Jewish lobby.” Clearly, Khan needs new media advisers. His rebuttal made the story go national, dredging up memories of holier-than-thou Khan’s less than pious past. In any event, Ahmadis have boycotted every election since 1985, and they’re not voting this time around either.