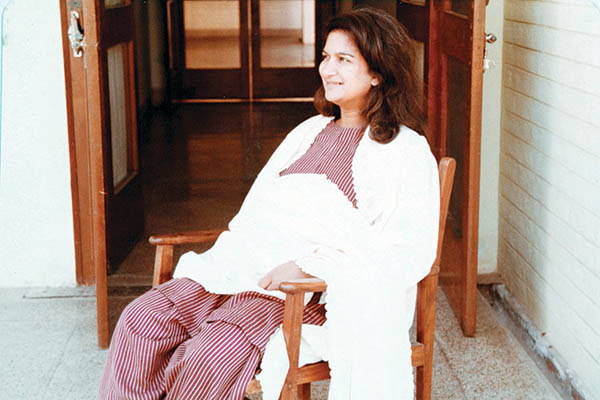 The procession wended its way through rows of graves in the Cavalry Ground cemetery, carrying its cargo toward her final resting place. An occasional but persistent cry of Nara-e-Shahadat! rent the air. Some scattered voices rallied to the call. There is no God but Allah, and Muhammad is His messenger.

It would have been an unremarkable sight to the casual observer, except for one startling detail. Two women walked with the male mourners as part of the procession, helping to carry the cot in which Nigar Ahmad’s body lay. To the left, the group was flanked by her brilliant, loving daughter-in-law, Kate Vyborny; and leading from the front—face carved in grief, back straight with determination—walked her lifelong friend and partner-in-feminism, Nighat Saeed Khan.

Indeed, this was anything but a run-of-the-mill funeral. Just half hour earlier, a larger group of mourners had gathered at a private residence to pay their final respects. As the men started lining up at the front for the funeral prayer, a row of women formed quickly, about 10 paces behind. The cleric leading the prayer, looking visibly perturbed, called out to the women to move further back. We are at the back, came the firm response, please continue with the prayer. Slowly, the space between the two groups filled up with more men. And then, when there was no more space, the remaining men respectfully lined up behind the women.

Afterward, Nigar’s coworkers, friends and family gathered in a tight circle and sang “Ye Jeevan Hai,” a Kishore Kumar hit that she loved and often sang herself, which has widely come to be seen as representative of her c’est la vie philosophy on life. The group then transitioned to some feminist numbers: songs that were sung year after year at the Feb. 12 Pakistan Women’s Day marches and the March 8 International Women’s Day processions.

It was all a demonstration of love as much as it was a final, collective act of subversion—their last show of loyalty to a woman who broke the rules all her life in order to wrestle women’s rightful freedoms from the jaws of patriarchy. Anyone who knew Nigar Ahmad would testify to the fact she would not have wanted it any other way.

Nigar’s first act of rebellion was her birth itself. She was born Feb. 16, 1945, to Indian Civil Service officer Riazuddin Ahmed and his wife, Nayyar Hussain, who had tentatively been holding their hat out for a boy. Instead, they got a mighty girl. A natural leader and fiercely independent spirit from the start, her pursuits did not include playing with dolls or dressing up prettily; she liked drama, horse riding, and reading. In later years, her mother (now Akhtar, her maternal aunt; Nigar’s birthmother died in an accident) proud of and bemused by her strong personality started calling her just “Ahmed.”

Most women of her generation tended to change their surnames when they got married. Nigar decided to change the spelling of her surname to make it culturally and phonetically appropriate. She thus became the one Ahmad in an entire clan of Ahmeds. After having proven herself repeatedly at a time when young women were not considered likely candidates for higher degrees, scholarships or fulltime jobs, she had won the right to do exactly what she wanted.

And that she did. She had a seemingly insatiable desire to be free, and she found herself a husband who delighted in her achievements, who further cemented her belief that she had the right to fly, to aim high, to change the world—no matter what the world thought of it. Nigar Ahmad and Tariq Siddiqi’s romance lasted for decades. They were known for being a couple who loved each other completely, and who passionately supported each other’s and their children’s right to do as they pleased, leaving a long line of people pulling their hair out in their wake. (Their standard response to such people would normally be, “Relax.”)

It was this refusal to be chained down by societal expectations that enabled Nigar Ahmad to become the trailblazing feminist and development worker she eventually came to be known as. Her name became synonymous with Aurat Foundation, the organization she cofounded with feminist lawyer and activist Shehla Zia. Not surprisingly, ideas that remained in the realm of rhetoric made her impatient. Her specialty was turning ideas into action.

Under her leadership, the foundation did path-breaking work to give Pakistani women basic rights. In the 1990s, Nigar started talking about and campaigning to recognize household work as economic activity and have women’s work counted in the national census. Twenty years later, the 2017 population census form counts six types of work by women—a paradigm shift in policy thinking. The woman who had cheekily arranged for her nikah document to be signed by two women and one man campaigned relentlessly to give women their basic marriage rights. There is a penalty fee in the Punjab today for any cleric who crosses out any portion of the nikah document, effectively making it illegal to deny a bride her right to divorce or haq mehr. Women’s political representation was another part of Nigar’s long-term vision for Pakistan. Aurat Foundation fought for and won a 33-percent quota for women in local government during Gen. Pervez Musharraf’s rule.

Running a development organization was never enough for Nigar Ahmad. She wanted to change the fabric of injustice that suffocated Pakistan’s women and, in many ways, she did. But what ultimately differentiated Nigar from so many of her peers, and those from her field who have come after her,was not just her achievements and her dogged free spiritedness, it was her almost unlimited ability to give of herself. It was important to her to include, not exclude. It mattered to her to build people up, not belittle them. Nigar Ahmad trod the earth free, but she would never knowingly tread on people’s feelings.

It would not be enough to acknowledge this as simple generosity of spirit. It was also an ideal—a political statement, even. It inspired her work; it inspired others to be like her. Nobody was below her standards of association; everybody was deserving of respect and attention. For years, people who visited the Siddiqi-Ahmad household would find it populated by a bewildering array of casual visitors, office staffers, and houseguests. People would often be obliged to sit for hours in the company of complete strangers. There would be an array of interactions, be they awkward conversations, heated discussions on politics, gender and economy, or happy reminiscing. In the center of all this eccentricity would be Nigar, totally accepting of people of all stripes, perfectly at ease, and more than happy to maintain this open house that had virtually achieved the status of a melting pot over the years.

When it was too late to receive visitors, she would start calling people on the phone. No one escaped Nigar Ahmad’s earnest late-night calls, in which she would want to discuss an idea that had been nagging her, or continue a conversation from earlier that day (which could easily be finished the next day), or talk about a matter that directly concerned the person she was ringing (their child’s promotion, their choice of degree, their mother’s ill health).

In the final few years of her life, in which advanced Parkinson’s really began to extract its pound of flesh from her (physically and mentally), the network of visitors and well-wishers began to fall away, and it became more and more difficult for her to have articulate conversations on the phone. She entered a different phase in her life at this point. The illness took over everything, and she began to focus on finding happiness in small, individual moments: a Bollywood item number on television, a conversation with her son, a shared dance with her daughter-in-law.

In the months preceding her death, she rallied a bit. She came to Karachi to visit family, where she spoke excitedly of a project proposal she was working on. She arranged a get-together on her father’s birth anniversary for an evening of remembrance and celebration. Last winter, she attended her dear friend Samina Rahman’s daughter’s mehndi. People who saw her there commented on how much she enjoyed herself. Her wheelchair was rolled onto the center of the dance floor, and she danced her heart out. All evening, old associates, acquaintances, family, friends, and their children kept approaching her, greeting her, and dancing with her.

She spoke about the wedding for weeks. “I had no idea Lahore loved me so much,” she commented to her sister.

“For God’s sake, Nigar. Of course they love you.”

The cot was set down on the ground, next to the plot that had been readied to receive her. Her sons briefly removed the white cotton shroud from her face and took some time to absorb those beloved features one last time. They lowered her into the grave themselves. Her favorite shawl, a deep red with cream Swati embroidery on it, was laid out on top of her, to the mortification of the new cleric who was praying over the burial ceremony. The men and women present scattered soil and flowers on her grave. Nigar’s son picked up three handfuls of earth and gave them to her husband, his father, who was in a wheelchair. Tariq Siddiqi accepted each fistful of it and let it fall through his long fingers back into the waiting palm of his son, who then showered it on the grave. Aurat Foundation members huddled around Nigar’s grave in one final circle of support, pledging to continue her work, declaring that for them she was not dead, and would never die.

Every moment of Nigar Ahmad’s final farewell spoke of the passing of someone who had left behind something bigger than herself: a network, a legacy, a vision. Those who saw her before she was buried said that she was at peace, a small smile dancing at the corners of her mouth.

Aslam is the cofounder of the Desi Writers’ Lounge and past editor of its literary magazine, Papercuts.