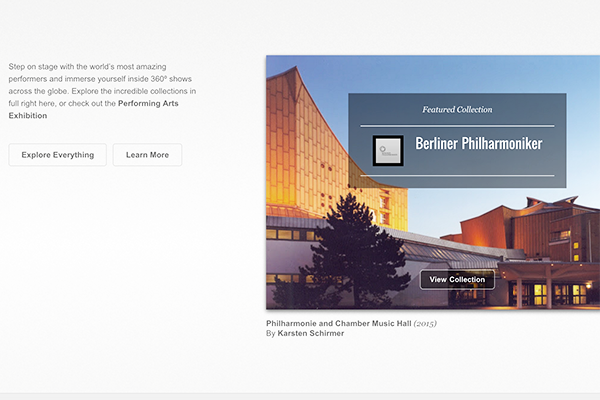 Google on Tuesday began letting online viewers get prime seats to ballets, operas and orchestra concerts, or even virtually step on stage with performers.

Google Cultural Institute launched an immersive 360-degree viewing experience in an alliance with more than 60 performing arts organizations, including Carnegie Hall and the Paris Opera. “The new Performing Arts exhibition gives you a view that’s even closer than a front-row seat in the house,” Institute director Amit Sood said in a blog post. “With 360-degree performance recordings, you can choose a dancer’s-eye view of the crowd, or look down from the stage into the orchestra pit.”

Members of virtual audiences are also given opportunities to peek backstage

“At the world’s leading performing arts venues—like Carnegie Hall, the Berliner Philharmonie, the Bolshoi Theatre—artists, costume designers, musicians, stage crews and many more all come together to create the perfect moment on stage,” Sood said. “And now you can join them.”

Online visitors can visit the wig workshop at the opera house in Brussels or peer at the historic arches beneath the stage of the Fundacao Teatro Municipal in Sao Paolo, according to Google. Street View imagery in Google Maps will provide backstage scenes, and let people check out views from various parts of venues.

“We have enjoyed working with the Google team over many months to look ahead, exploring new ways that technology can provide access to the world of Carnegie Hall,” said the executive director of the New York City facility, Clive Gillinson. “We appreciate their strong commitment to sharing the power of the arts and the work of so many great institutions with people everywhere.”

The Google Cultural Institute was founded in 2011 to enable anyone with an Internet connection to have access to arts from around the world, according to Sood. The institute started with partnerships with a small number of museums and now boasts alliances with more than 900 institutions.