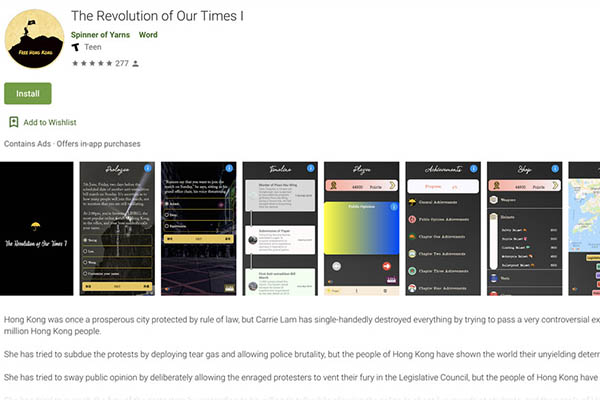 Google on Thursday removed from its online marketplace a mobile game that let people play as a Hong Kong protester, saying it violated a policy against cashing in on conflicts.

The move came after Apple removed an app criticized by China for allowing protesters in Hong Kong to track police, and as Beijing steps up pressure on foreign companies deemed to be providing support to the pro-democracy movement. Google said its decision to yank The Revolution of Our Times game from its Play Store did not result from any takedown requests by police or any other party outside the California-based company.

“We have a longstanding policy prohibiting developers from capitalizing on sensitive events such as attempting to make money from serious ongoing conflicts or tragedies through a game,” Google said in response to an AFP inquiry. “After careful review, we found this app to be violating that particular policy and suspended it, as we have done with similar attempts to profit from other high-profile events such as earthquakes, crises, suicides and conflicts.”

Apple, meanwhile, pulled HKmap.live in a move blasted as another case of companies outside of China bowing to the will of that country’s regime.

Chinese state media this week tore into the app, which collates information on police locations submitted by users, charging that it was helping “rioters.” Communist Party mouthpiece The People’s Daily said by stocking the app, Apple was “mixing business with politics, and even illegal acts.”

On Thursday the app was no longer available on Apple’s Hong Kong App Store.