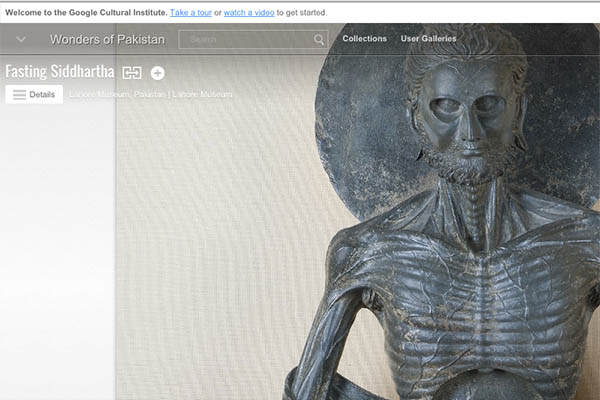 Tech giant Google’s Cultural Institute, an online platform that digitizes archives, works of art, and historical architecture across the world, is hoping to bring Pakistan’s heritage to a global audience through virtual tours and high-resolution images—while boosting tourism at home.

“Pakistan is brimming with a rich historical and cultural heritage, with stories and artifacts that we are keen to preserve for future generations,” says Ann Lavin, director of Public Policy and Government Affairs at Google Asia-Pacific. Six Pakistani institutions have signed up for the initiative thus far, providing audiences online with pictures of 467 artifacts from 13 different exhibits, including the rare Fasting Siddhartha sculpture currently displayed at the Lahore Museum’s Gandhara Gallery.

The Google Cultural Institute currently features over 60 countries’ cultural artifacts, including some that allow viewers to zoom in at the brushstroke level. The initiative hopes that by increasing the variety of cultural material available online, it will democratize access to it.

“There isn’t a single museum in the world that can accommodate the millions who browsed the collection on the GCI website,” says Lavin. James Davis, program manager for Institute, agrees but cautions against seeing the online archives as a replacement for brick-and-mortar museums. “We consider the digital representation of the museum a complement to physically visiting the museum,” he tells Newsweek. “It’s an advertisement to go and see these places.”

Fakir Khana Museum curators Fakir Saif-ud-din Bokhari and his nephew Farhan Shah echo Davis. While enthusiastic about the digitizing of their collection, they do not believe it substitutes for a visit. “Nothing is the same as a visit to the place. The experience of holding the artifact in your hands is something you can’t get online,” Shah tells Newsweek, adding that Google was only granted access to part of the collection and there are several other pieces to be seen for people who visit in person. 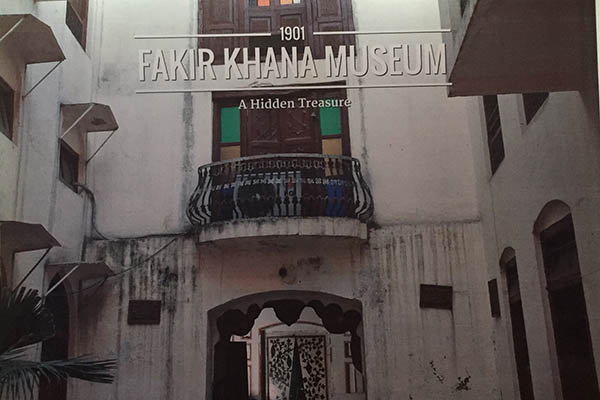 According to Davis, the Palace of Versailles in France saw a 20 percent increase in visitors after its images were uploaded to the online platform. Google retains the same hopes for Pakistan’s fledgling tourism industry, which has struggled since the U.S. invaded neighboring Afghanistan in 2001, leading to an upsurge in militant violence. According to the World Travel and Tourism Council, the direct contribution of travel and tourism to Pakistan’s GDP last year was only 2.9 percent.

In Pakistan, the Institute took nearly two years to archive exhibitions from the Lahore Museum, the Mohatta Palace Museum, the Walled City of Lahore Authority, the Heritage Foundation of Pakistan, the Fakir Khana Museum and the AAN Collection of Pakistani art. It has also created virtual tours of ancient historical sites using Google Street View images—all without costing Islamabad a single penny.

“There is absolutely no financial transaction between the museums, governments and us,” says Davis, noting that the Institute is a non-profit organization. While not at liberty to disclose a budget for the Institute’s work in Pakistan, Google representatives said it was “significant.”

But while the Institute’s archives are seen as a boon for Pakistan’s image abroad, there are concerns over its success within the country. There are an estimated 31 million Internet users in Pakistan—less than 11 percent of the population—although these figures are expected to rise with the arrival of high-speed 3G services. A bigger problem is the lack of support for Urdu, which remains the primary mode of communication for most Pakistanis.

Google, however, is optimistic. “The trend we’ve noticed in Pakistan is that mobile access is skyrocketing, even if access still has a long way to go,” says Alexander Long, country lead for Google’s Public Policy and Government Affairs. “Pakistan is exciting, because the West does not know as much about this country as they do about others,” Davis adds. He hopes the digital “taste” of Pakistan’s cultural richness will goad people into visiting the country themselves. “You could begin your journey online and you may just end up on the steps of your destination,” he says.

Pakistan with its centuries old Menjo daro and Harrapa archeological sites, add to this the relatively recent excavations in Mehrgarh (Balochistan province), is no less significant than the ancient civilizations of Egypt and Sumerian ones. Then are the other numerous cultural landmarks which again are gems of the country’s magnificent history.
Being the frontline state (not only in today’s war against terrorism, but also during different periods of history), when all the invading armies which wanted to conquer the Indian subcontinent, first entered this land on the frontline, it has numerous historical/heritage sites which every tourist, when he/she knows about the significance of these tourist attractions through Google’s virtual tour, should not /would not miss visiting these sites on their physical locations. Google’s remarkable effort in this regard, is a great contribution to motivate the interested tourists see these gems of Pakistan Tourism, notwithstanding the Newsweek for updating the lovers of art and culture, history and heritage of Pakistan, which indeed is commendable.

We were here before the emanation of Vedic and Hindu cultures, before Judaism, before Christianity and before Islam.

We have a history of over 9000 years from Mehrgarh (7000 BC), located between Quetta and Sibi in Balochistan; Rehman Dheri (4000 BC) in Khayber Pukhtunkhwa; Harappa (over 3000 BC) in Punjab; Mohenjo Daro (2500 BC) in Sindh; having more than 50,000 rock carvings, 5000 inscriptions and many other heritage resources ranging from the Neolithic period of 8 to 9 000 years ago, in Gilgit Baltistan and the great Sharda University in Neelum Valley in Azad Kashmir.

The people of Pakistan were politically united with Republic of India only for about 200 years of forced political unification during the Mauriyan (100 years) and British (100 years) times out of a total known history of over 9000 years. For over 500 years it were the Pakistanis who ruled India. For the remaining over 8000 years we remained a separate entity.

We don’t know what religion that we followed during the pre-Harappan and Harappan periods, later though, we were Zoroastrians, we followed Vedic and Hindu culture, we were Buddhists, Jains and are now Muslims. However one thing has been historically proven that, Hinduism was never a majority religion followed by people of ancient Pakistan. We were majority Buddhists and later became majority Muslims.

The people of Pakistan have an identity of their own since over 9000 years.

Extremely disappointing to say the least for the digitization has been carried out without any regards to prevailing state of the art in computational photography for museum artefacts. The coins collection is actually horrible to look at for it has been exposed in some light tent using the same techniques we employ for commercial photography and the limitations are obvious in metalic glazes and evasive details. One would have imagined that google would have invested in techniques like Polynomial Texture Mapping (PTM) or Reflectance Transformation Imaging (RTI) to make a decent presentation quality possible but alas that has not been the case.
Hence this effort is at the same level of quality as the rest of the sorry state of imaging in our museums today!