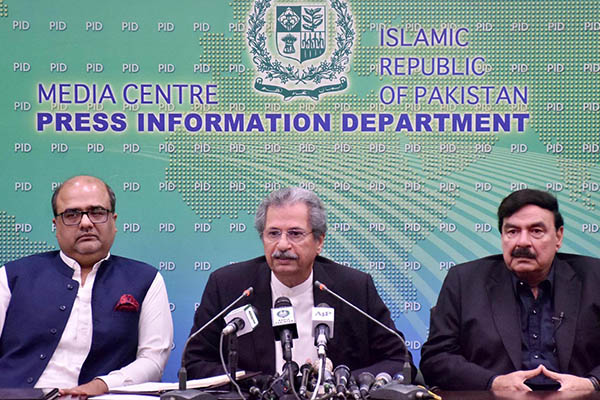 Pakistan’s federal cabinet on Tuesday sought to address a ‘lacuna’ in the Army Rules and Regulations, amending it to include the words “extension in tenure” to justify granting incumbent Chief of Army Staff Gen. Qamar Javed Bajwa three more years in office.

Following the Supreme Court’s suspension of the notification of Gen. Bajwa’s extension, the federal cabinet met in two sittings led by Prime Minister Imran Khan. During these meetings, it was decided to amend Section 255 of the Army Rules, said Education Minister Shafqat Mehmood at a press conference. “Under Article 243 of the Constitution, the prime minister has the prerogative to give an extension to the Army chief keeping in view the prevailing circumstances,” he added.

According to Mehmood, the decision to grant an extension to Bajwa was taken due to ongoing rifts in ties between Pakistan and India, especially over the crackdown in Kashmir. He also suggested New Delhi could stage a false flag operation against Pakistan, but did not offer details on how the Army chief’s extension could counter that potential incident. “India attacked Pakistan in Balakot, which was repulsed by our Pakistani armed forces. There have also been unprecedented violations at the Line of Control and the current situation in India-Occupied Jammu and Kashmir was all considered by the prime minister when he decided to extend the service of the Army chief,” he added.

The government, during the federal cabinet meeting, also decided to cancel the Aug. 19 notification issued by the Prime Minister’s Office to extend the Army chief’s tenure. In its place, it issued a fresh extension order, which was approved and signed by both the P.M. and President Arif Alvi within hours.

Railways Minister Sheikh Rasheed, who was also at the press conference with Mehmood, said Law Minister Farogh Naseem had resigned from the federal cabinet to represent the COAS in the Supreme Court. “Naseem left his ministry voluntarily to assist Attorney General Anwar Mansoor in the case of COAS extension in the Supreme Court,” he added.

Special Assistant to Prime Minister on Accountability Shahzad Akbar, meanwhile, sought to clarify the court’s questioning of the majority of the federal cabinet approving the first extension order of the COAS. He said that while only 11 of 25 members had signed it initially, eight more had given their assent later. Five members could not do so as they were not in the country, he added.

The three-year term of Gen. Bajwa is set to end on Thursday (Nov. 28). He can continue in his role if the apex court decides in his favor by Nov. 29.