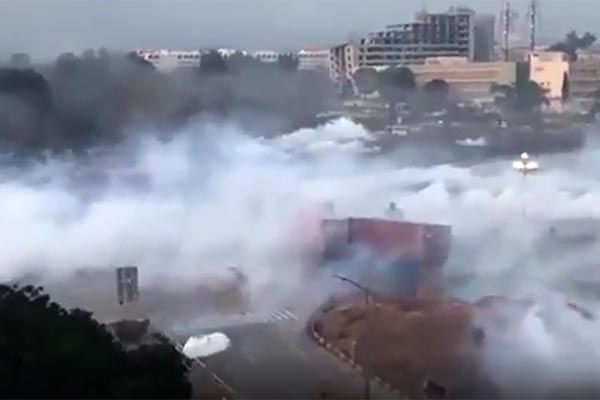 Protesting government employees and representatives of the federal government negotiated late into the night on Wednesday, with Interior Minister Sheikh Rashid Ahmed claiming an official announcement accepting the protesters’ demands would be issued on Thursday afternoon.

“Talks between representatives of government employees and a government committee on increasing salaries have succeeded,” he posted on Twitter early on Thursday morning. He said that a formal announcement in this regard would occur at 2 p.m., adding that all protesters that had been placed under arrest would be freed.

According to sources, the protesters have been assured of a 20 percent increase in their basic salaries against a demand of 40 percent. The government was represented by the interior minister, Defense Minister Pervaiz Khattak, and Minister of State for Parliamentary Affairs Ali Muhammad Khan, while the employees were represented by All Government Employees Alliance Chairman Rehman Bajwa.

A sit-in by government employees in Islamabad continued on Thursday morning, with the protesters vowing to remain at the site until the government had confirmed that their demands had been accepted.

On Wednesday, the federal capital took on the appearance of a warzone as police continued firing tear-gas shells at the protesters for hours, leaving areas of the city under a perpetual haze of toxic gas. Private broadcaster Geo News reported that several of the shells had expired, raising concerns about whether their toxicity levels had increased. On Thursday morning, police confirmed that Sepoy Ishtiaq of the Special Branch had died after inhaling the tear gas during his deployment at the protest.

The protesters were demanding a raise in their basic salaries, noting that rampant inflation had made it extremely difficult for them to manage their household budgets. Ahead of the protest, the government placed 10 leaders under arrest, provoking the government workers to announce they would march toward Parliament House from Pakistan Secretariat.

The federal government employees were also joined by the All Pakistan Clerks Association and employees of the Khyber-Pakhtunkhwa, Balochistan, Punjab and Sindh provinces. The Punjab government, on Thursday morning, announced it would take “strict action” against any employees participating in the protests, terming it “misconduct.”

Addressing a press conference, the interior minister claimed the matter had been resolved on Monday but the protesters demanded greater concessions than had earlier been committed to. He said the government had agreed to increase the salaries of grade 1-16 employees by an average of 40 percent, but they had then demanded that government employees of grades 17-22 should also receive raises. He claimed this would place undue burden on the government, which could not afford such a large sum.

Ahmed also claimed that he had no role in determining salaries of provincial employees, adding that he was willing to negotiate on their behalf with the provincial governments in this regard. The ruling PTI has the government in all provinces except Sindh.

Rukhsana Anwar, president of the National Program Health Employees Federation of Pakistan, announced that more than a thousand female healthcare workers had also joined the sit-in after the government failed in adhering to an earlier agreement with them. In October, the healthcare workers had protested for regularization and pay raises, resulting in the government signing an agreement promising pension and gratuity, rationalized service structure, and security and uniform salaries. She said none of these demands had been met.

As the protest continued into the night, opposition leaders condemned the government’s heavy-handed response and expressed support for the protesters. Pakistan Peoples Party Chairman Bilawal Bhutto-Zardari issued a statement demanding the “selected” government accept the legitimate demands of the government employees and release any arrested people. Noting that the incumbent government had imposed record increases to electricity tariffs instead of giving incentives to employees, he said he stood “in solidarity with the protesters.”

Similarly, Pakistan Muslim League (Nawaz) Vice President Maryam Nawaz asked authorities to stop using tear gas and sticks in attempts to disperse the protesters. “For God’s sake, stop this merciless torture,” she posted on Twitter. “These are not the enemies, but poor Pakistanis demanding their rights.”