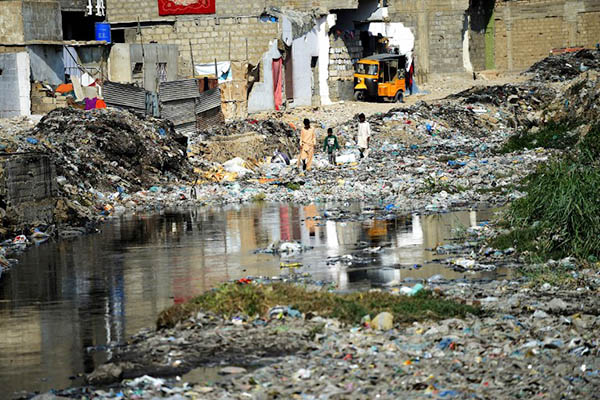 File photo of a trash-filled waterway in Karachi. Rizwan Tabassum—AFP

Leaders of political parties with large followings in Sindh—the Pakistan Tehreek-e-Insaf, Pakistan Peoples Party and the Muttahida Qaumi Movement (Pakistan)—on Wednesday decided to form a coordination committee to boost collaboration between the federal and Sindh governments to fix the persistent issues facing Karachi.

However, a spokesperson for Sindh Chief Minister Murad Ali Shah claimed the committee would coordinate on “projects in Sindh,” without specifying that it would be focused on Karachi.

Acknowledging that the federal government, led by PTI, and the PPP-led Sindh government had “serious political differences,” Umar said it was time for them to work together to uplift Karachi. He said the six-member committee would not be led by anyone and would operate on mutual understanding.

According to Umar, the committee’s first meeting would take place on Thursday (today), with another meeting scheduled for Saturday in Karachi. He said all the issues facing Karachi had viable solutions and vowed to clear obstacles to long-pending projects such as the K-IV Water Project and Karachi Circular Railway.

To expedite the process, the planning minister said, the committee would finalize a list of projects within two weeks that would be divided between the center and Sindh. “The legal aspect and the source of financing the projects will also be worked out in the timeframe,” he added.

To a question, Umar stressed that cooperation with the PPP to uplift Karachi would have no impact on the government’s accountability process.