Government Hits Back at Opposition’s APC 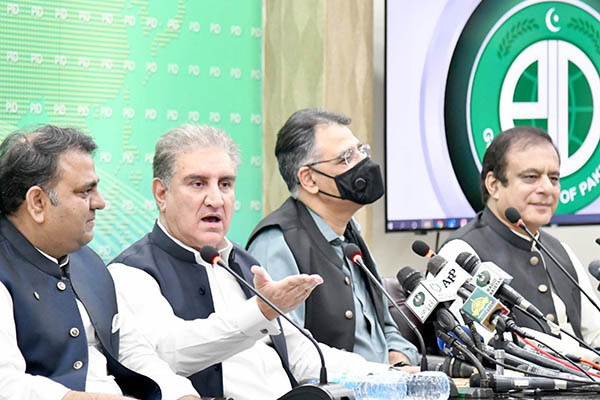 Lawmakers of the federal cabinet on Monday criticized the united opposition’s all-parties conference from a day earlier, alleging it had maligned state institutions and stoked baseless controversy over the 2018 general elections.

On Sunday, the opposition parties had announced the formation of the Pakistan Democratic Movement alliance and vowed to initiate a mass protest movement to oust the incumbent government over its poor governance record.

He questioned why Sharif had criticized the 2018 general elections but had never examined the elections that had brought him into power thrice. “What Nawaz stated was contrary to the facts,” he claimed, adding that 413 petitions have been filed with the Election Commission of Pakistan over irregularities in the 2013 elections, while 299 were filed after the 2018 elections.

Faraz alleged Sharif was maligning the electoral process solely because his party had lost. “He is not helping Pakistan in any way by doing so,” he claimed.

The information minister also pointed out that the PMLN was the second largest party in the National Assembly and should demand electoral reforms through Parliament.

Asad Umar claimed that the opposition parties had come together to “protect their interest,” and claimed Prime Minister Imran Khan had already predicted this would happen. “When Imran Khan came into power [opposition] thought this government would fail due to the debts and economic conditions they had left behind,” he claimed and slammed the opposition for criticizing the government’s coronavirus response.

“In yesterday’s [APC], the opposition did not discuss Pakistan’s coronavirus strategy because world forums, including the United Nations, have recognized Pakistan’s efforts,” he said. He claimed the opposition’s “desperation” was clear from its opposition to Financial Action Task Force-related bills intended to take the country our of the grey-list.

“Their NRO came in front of the people when they demanded 34 amendments to the National Accountability Bureau law,” he said, reiterating government claims that the opposition had tried to “blackmail” them.

Umar also claimed the PTI had “successfully” announced development for Karachi and was working on a package for Balochistan.

The crux of the planning minister’s speech was focused on the coverage of Sharif’s speech by the Indian media. He claimed that Pakistan was “now” moving forward because the civil-military relationship was not built on suspicions.

“He [Sharif] should have at least thought before speaking against the military, as several of their people were martyred in operations during PMLN’s government,” he said, though Sharif did not mention the rank and file of the military at any point in his speech; focusing more on “unwanted” interference in the political process.

During his time at the mic, Fawad Chaudhry claimed Sharif’s speech—which the government admits was only broadcast because the P.M. “allowed” it—proved media freedom. “In Nawaz’s speech, he said that the military and judiciary were in the wrong,” he said, adding that the thrice-elected prime minister was forgetting his own history.

“He has forgotten how he became known in politics,” he said, referring to military dictator Ziaul Haq’s support to the PMLN leader in his formative years as a politician. He also reiterated the government’s claim that the sole issue right now was the opposition wanting relief from the corruption cases against them.

Shah Mehmood Qureshi termed the APC a “a collection of contradictions,” and claimed it showed the opposition was feeling helpless. He also alleged that Sharif’s speech had been “celebrated” in India and slammed the previous government—as is routine for the PTI—for leaving the country in such a precarious position.

He also questioned why the opposition was calling for protests in winter when a second wave of the coronavirus was expected, adding that it was in contrast to their demands for a “total lockdown” nationwide.

“We are not responsible for the opposition’s failure [to include its amendments in the FATF bill],” he said.

Discussing the APC’s criticisms of the country’s foreign policies, Qureshi claimed the entire world had lauded Pakistan’s role in the Afghanistan peace process. “A political settlement [in Afghanistan] was PTI’s and Imran Khan’s stance since day one. The world wasn’t convinced before, but it is now,” he said, and also claimed the government had never allowed attention to waiver from Kashmir.