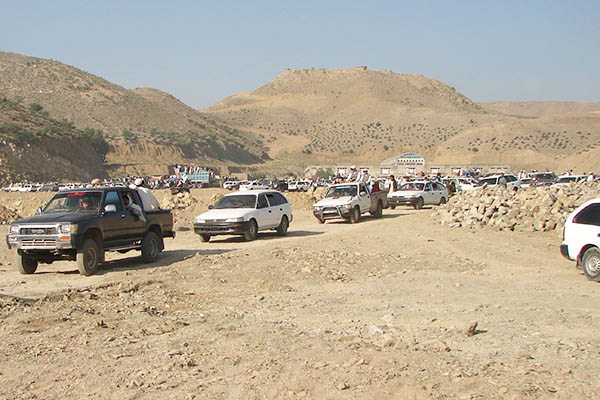 Residents of North Waziristan leave the region during a suspension in the curfew. AFP

Local official says the curfew has been lifted for three days to allow civilians to leave the area.

The government of Pakistan has decided to temporarily suspend the curfew in North Waziristan, where the military claims over 200 militants have been killed in the past three days, to allow civilians to leave the area.

Siraj Ahmad, the political agent of the region, told Newsweek: “Following government directives, we have lifted curfew from all areas of North Waziristan for three days so that local families may leave the area and join internally displaced persons camps or seek refuge in other parts of the country.”

According to Ahmad, the curfew would be lifted in tiers to allow everyone to leave safely. “Families in Miranshah and Ghulam Khan will be permitted to leave the area today. On June 20, we will allow families from Data Khel and Boya areas to leave,” he said. “All IDPs can get food and essential supplies from the Esha and Khjuri checkposts, where government and security officials have been deputed to serve them,” he added.

Ahmad said the decision to suspend the curfew had been taken to protect the civilian population of North Waziristan. “In order to avoid collateral damage, the government has decided to let the locals move to safer areas,” he said.

The government had imposed a curfew in North Waziristan three weeks ago, trapping people in their homes as the military prepared to launch an operation to rid the region of militants.  Fleeing locals have claimed that the military’s airstrikes have resulted in several civilian casualties, but the Pakistan Army has not commented on these claims yet.