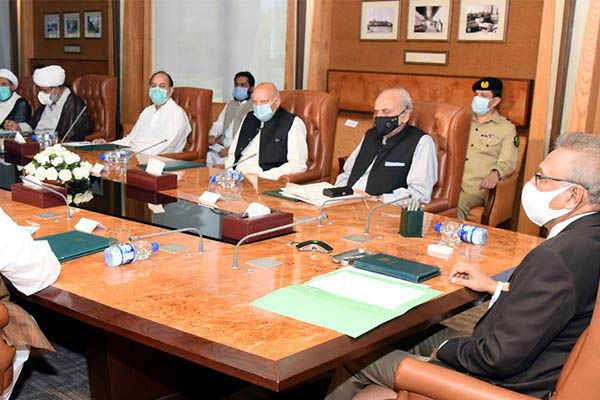 While majalis and processions will be allowed, they will be subject to SOPs to curb the spread of COVID-19

The Government of Pakistan on Thursday agreed to allow majalis and religious processions for the Islamic month of Muharram subject to the implementation and enforcement of standard operating procedures (SOPs) to curb the spread of the novel coronavirus.

A meeting led by President Arif Alvi, and including Shia Ulema as well as senior lawmakers, decided that all religious gatherings for Muharram would bar anyone from attending without a face mask. In addition, no majlis site would have carpets or rugs, any prayer mats would be disinfected with a chlorine bath daily, and social distancing would be ensured at all public gatherings.

Similarly, there would be bans on the participation of elderly and children; mourners would be directed against shaking hands or hugging; no prayer mats or prayer beads would be allowed; and food would be provided in takeaway containers rather than served on site.

According to the guidelines agreed between the government and Shia ulema, mourners would also be barred from touching the Alam (flag), Taazia (miniature mausoleums) and Shabih. Only licensed processions would be allowed and organizer would be required to provide hand sanitizers, face masks, and single use glasses for drinking water, as well as ensuring a limited number of participants.

Addressing the meeting, President Alvi lauded the religious scholars for cooperating with the government during Ramzan and Eidul Fitr to prevent the spread of COVID-19. He said the government hoped for similar cooperation during Eidul Azha and Muharram.

The visiting ulema similarly lauded the president’s role in bringing about national unity and harmony among different schools of thought.