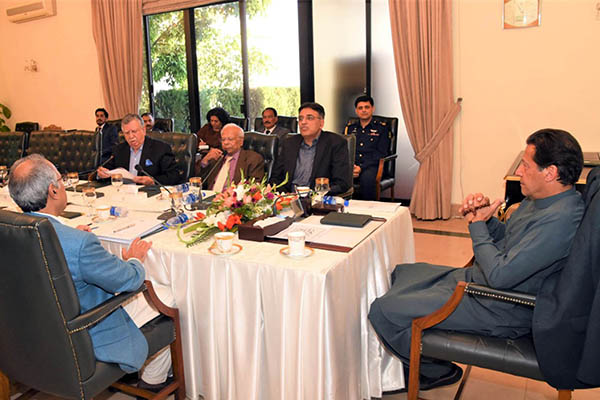 The Pakistan Tehreek-e-Insaf-led government will assist in the purchase of rations for families earning less than Rs. 25,000 per month, as it is the foremost responsibility of the state to ensure low-income segments of society are not denied their basic needs, Prime Minister Imran Khan said on Monday.

The prime minister said the government was already subsidizing basic essential commodities through the Utility Stores Corporation to ensure people could purchase flour, ghee, sugar, and pulses at affordable prices.

Referring to the Shelter Homes and Ehsaas Kitchens Program, Khan claimed these initiatives were a practical manifestation of the government’s commitment to care for the downtrodden segments of society. He also appreciated the roles played by the private sector and charitable individuals in ensuring the helpless and weak segments of society were not abandoned.

In addition to the prime minister, the meeting was also attended by Planning Minister Asad Umar, Adviser on Finance Abdul Hafiz Shaikh, Adviser on Reforms Isharat Hussain, Special Assistant on Social Protection Sania Nishtar, former finance minister Shaukat Tareen and other senior officials. Various proposals were presented to the prime minister on how best to improve the multiple initiatives taken by the government to provide relief to low-income segments of society. Nishtar also informed the prime minister about progress in the ongoing fresh survey of poverty in the country.

Khan directed the meeting’s participants to deliberate upon proposals to provide even more relief to low-income people. He also urged the finance and economic teams to ensure a portion of this year’s budget was allocated for providing rations to the impoverished.

Separately, posting on Twitter, the prime minister hailed last month’s drop in inflation by attributing it to decisions taken by the federal cabinet. “We will continue pursuing measures to bring down inflation and reduce burden on citizens,” he added.