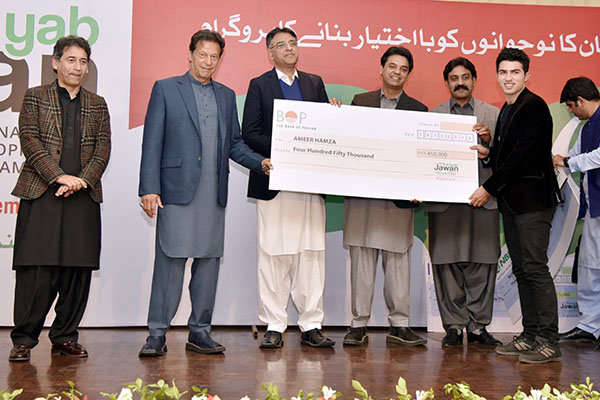 It is the government’s job to remove obstacles preventing the normal functioning of businesses, Prime Minister Imran Khan said on Friday.

Addressing a ceremony to distribute checks for the Kamyab Jawan Program in Islamabad, Khan said the initiative would disburse funds transparently, adding this was essential to match people’s expectations. He said 1-1.5 million youth had applied for loans under this program already, of which 190,000 were women. “It is a great omen for the country for women to become active participants in business activities,” he said.

During his speech, Khan said the Pakistan Tehreek-e-Insaf-led government would facilitate small and medium businesses to spur job creation. He said small and medium industries employ a large number of people and play an important role in the economic development of a country.

Reiterating his resolve to transform Pakistan into a tourist destination, the prime minister said local youth could greatly benefit from establishing tourism-related businesses that cater to both domestic and foreign visitors. These projects, he added, would help generate revenue and bulk up foreign exchange reserves.

Khan said the government aimed to expand the scope of such initiatives in future to help the maximum number of citizens.

Also on Friday, Special Assistant to Prime Minister on Youth Affairs Usman Dar said the Kamyab Jawan Program was operating purely on merit as per directions of the prime minister. He said applications for loans had come in from all across Pakistan, and approvingly noted that the funds disbursed under this head would help youth find employment either directly or indirectly. He said proposals related to the IT sector would be given preference.

Dar said one million youth would benefit from this program, adding the core goal was to help business ventures that had potential to grow and prosper.