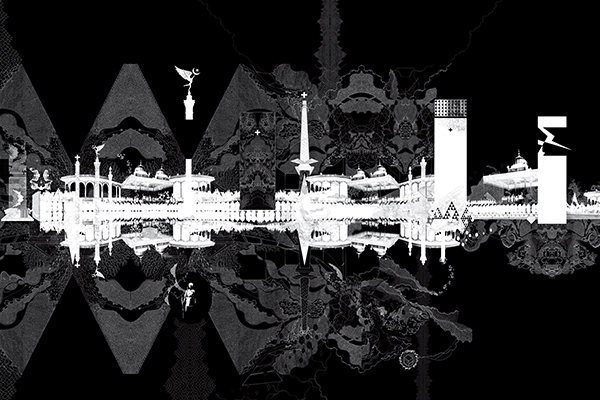 “Why have there been no great women artists?” asked American art historian Linda Nochlin in a landmark 1971 essay.

Look elsewhere around the globe, however, and women are thriving in some of the most dynamic up-and-coming art scenes. They’re even achieving widespread success in a country not exactly known for women’s rights: Pakistan. Female artists from the developing Muslim nation have been recently feted in exhibits like last year’s Hanging Fire at New York’s Asia Society and the Fukuoka Asian Art Triennial in Japan.

Women also hold prime positions of influence in Pakistan’s art system, running prestigious galleries such as Karachi’s Canvas and Poppy Seed, and heading key art institutes such as the School of Visual Arts at Beaconhouse National University in Lahore (under the direction of Salima Hashmi), and Lahore’s National College of Arts, which is overseen by Naazish Ataullah.

One reason for the unusually high ratio of female artists in Pakistan has to do with the fact that the art industry has not traditionally been viewed as a lucrative business by men, says South Asian art historian Savita Apte, who administers the Abraaj Capital Art Prize. Until very recently, creatively inclined males tended to focus on fields such as advertising or illustration, leaving the art field wide open for some very talented women.

And these women have been taking the art world by storm: for last year’s inaugural Jameel Prize, an award given to Islamic artists at London’s Victoria and Albert Museum, both finalists from Pakistan—Hamra Abbas and Seher Shah—were female. (The winner, Afruz Amighi, is an Iranian woman.) And at the Hong Kong International Art Fair this year, Pakistani painter Shahzia Sikander won the SCMP/Art Futures award.

Female Pakistani artists may also be drawing international buzz because of the way they defy gender stereotypes about their country. “Because of the perception in the Western press, which often portrays [Muslim] women as covered, when the world looks at Pakistan, they want to go into the minds of women,” says Amna Naqvi, a former investment banker, founder of Karachi’s Gandhara-Art gallery, and an important collector whose work has been lent to museums around the world.

One of Naqvi’s favorite artists is Aisha Khalid, a painter in her 30s who is married to artist Imran Qureshi—although Khalid is considered to be the bigger name. Khalid’s Birth of Venus paintings depict fully veiled figures against a backdrop of Islamic symbols. Another work combines grandmotherly embroidery with pointed sexual commentary, such as sewing pins stuck through a coat, with sharp needles exposed on the inside.

Even for artists whose work does not deal with overtly feminine symbols, the link between their creative drive and their place in Pakistani culture is evident. Sikander, who was awarded a MacArthur “genius” grant in 2006, says: “Women in Pakistan in general wield a lot more power than what is perceived from abroad. In Pakistani society, women are less coddled, which makes them much more resilient, resourceful, and original.”

For Sikander, her art is a means for her to “question the social and political values of [my] time.” This places her within an emerging tradition of trailblazing international female artists, alongside Japanese sculptor and painter Yayoi Kusama, photographer Miwa Yanagi, video artist Tabaimo, and Iranian photographer Shirin Neshat. As artists from developing countries explode into the global art scene, these women will be leading the way.