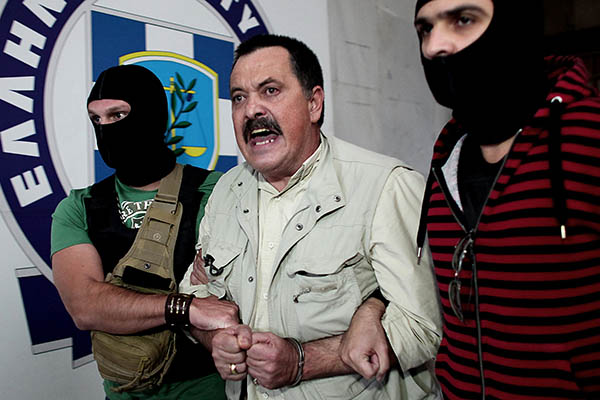 “We are dedicated in completely eradicating such a ‘shame’,” Samaras said in a speech to the American Jewish Committee in New York. “We must do it within the context of our democratic constitution. But we have to go all the way and do whatever it takes,” the premier said, according to a text released by his office.

Some two dozen members of the neo-Nazi party Golden Dawn, including six lawmakers, will appear in court this week after a series of arrests and police raids on party offices at the weekend.

A first wave of suspects, including four Golden Dawn lawmakers and lower-ranking members, are to be officially charged on Tuesday.

The party’s leader Nikos Michaloliakos is set to be charged on Wednesday, followed by deputy leader Christos Pappas on Thursday.

Testimony from former Golden Dawn members and police wiretaps have revealed a series of “criminal acts” by the group including attempted homicide and voluntary homicide, culminating in the murder of anti-fascist musician Pavlos Fyssas by a self-confessed neo-Nazi on Sept. 18.

Golden Dawn regularly organized “assault militias” in which dozens of members would ride the streets on motorbikes, hitting immigrants with sticks, according to a government report and testimonies cited in the Greek press on Monday.

“I took part several times in activities involving 50 or 60 motorbikes, with two people on each. The one who was sitting behind held a stick with the Greek flag and hit all the Pakistanis he could see,” one ex-member said in court testimony.

Golden Dawn has a “strictly hierarchical structure, the leader is all-powerful following the principle used by (Adolf) Hitler,” said the report by the deputy prosecutor of the Supreme Court, Charalambos Vourliotis.

The neo-Nazi party started its attacks in 1987, the report said, initially targeting immigrants and then turning against Greeks.

The magistrate’s report said party members were trained in military style—including the use of assault weaponry according to reports—and had allegedly committed dozens of criminal acts. These include scores of migrant beatings that police had allegedly failed to properly investigate until now.

Police on Monday continued their raids on Golden Dawn premises, searching for hidden arms supplies. Several police officers have been suspended for alleged links to the group.

A search of the home of Golden Dawn deputy leader Pappas in the northwestern city of Ioannina turned up photographs of Hitler, swastikas and German army helmets, reports said.

Greek authorities on Monday were examining ways to cut off Golden Dawn’s funding from the state, to which all parliamentary parties are nominally entitled. The justice ministry said it would table emergency legislation to stop the institutional flow of state funds to the party.

“Democracy cannot be funding its opponents,” Deputy Prime Minister Evangelos Venizelos, head of Greece’s socialist party, told a news conference. “When you have a criminal organization operating inside a political party, there must be funding sanctions. (Payment) suspension mechanisms will be put into effect” ahead of the Golden Dawn court trials, he said.

“I do not think they will dare to resign,” Venizelos said. “Nobody can make a mockery of parliamentary and democratic institutions (in Greece).”