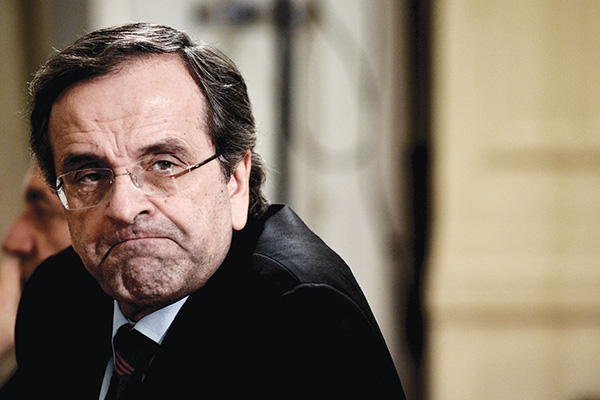 Is tough love from Prime Minister Samaras the ticket?

A year ago “Grexit” was the summer catchphrase among Europeans who had largely written off Greece as the first casualty of the European economic crisis. By the books, Greece’s economy is not much better this year. But thanks to austerity measures and more than a little bit of smoke and mirrors, this summer’s slogan—perhaps overly optimistic, yet noteworthy nonetheless—is “Greekovery.”

The man responsible for this is Greek Prime Minister Antonis Samaras, the 62-year-old head of the New Democracy Party who narrowly won a runoff election against leftwing politician Alexis Tsipras last June.

Samaras has spent his first year in office walking a tightrope between his constituents and the European Union and International Monetary Fund, which pushed Greece to adhere to the stringent conditions attached to a $315 billion bailout the country needed to stay afloat.

Samaras, who will meet U.S. President Barack Obama on Aug. 8 in a state visit to America meant to build confidence in the beleaguered nation, faced perhaps his biggest challenge recently when everyone from cops to coroners walked off the job to protest a parliamentary bill that included 25,000 additional layoffs. The protests began on July 15, with hundreds of police officers using their motorcycles and patrol vehicles to block Athens’s busiest streets as part of the demonstration. On the same day, 200 of the country’s mayors froze all services, including garbage collection. The next day, thousands of teachers, medical workers, and broadcasters came out in full force to protest the continuation of relentless austerity measures.

It’s true that these measures have yet to work any sort of dramatic turnaround. Youth unemployment in Greece has risen to 70 percent, and more than 60,000 businesses are expected to close in 2013, as the country lumbers through its sixth straight year of recession. Still, Greece has managed to stave off default and qualify for each bailout installment, a small miracle by almost any standard.

Samaras has also managed to privatize some of the country’s costly treasures, from museums to ports. And he promises the books will be in order this fall when the European Union and International Monetary Fund come for a follow-up review.

Samaras may have the least enviable job in the political world, but he has managed to keep his optimism. “Until recently, many analysts believed that Greece was a lost case,” he told a group of Chinese businessmen on a trip to Beijing. “We proved them wrong.” At least he convinced the Chinese, who have made major investments in the Greek port of Piraeus and are eyeing Athens International Airport, which is up for sale in a move to privatize state assets.

Now all he has to do is convince the Greeks that a few more years of tough love is the only way up.