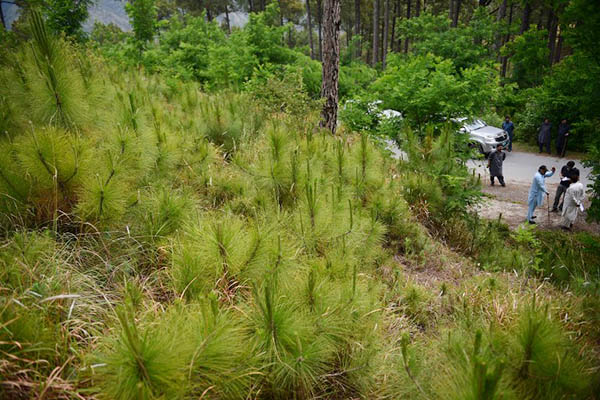 Khyber-Pakhtunkhwa celebrates plantation of hundreds of millions of trees

The change is drastic: around the region of Heroshah, previously arid hills are now covered with forest as far as the horizon. In northwestern Pakistan, hundreds of millions of trees have been planted to fight deforestation.

In 2015 and 2016 some 16,000 laborers planted more than 900,000 fast-growing eucalyptus trees at regular, geometric intervals in Heroshah—and the titanic task is just a fraction of the effort across the province of Khyber-Pakhtunkhwa.

“Before it was completely burnt land. Now they have green gold in their hands,” commented forest manager Pervaiz Manan as he displayed pictures of the site previously, when only sparse blades of tall grass interrupted the monotonous landscape. The new trees will reinvigorate the area’s scenic beauty, act as a control against erosion, help mitigate climate change, decrease the chances of floods and increase the chances of precipitation, says Manan, who oversaw the revegetation of Heroshah.

Residents also see them as an economic boost—which, officials hope, will deter them from cutting the new growth down to use as firewood in a region where electricity can be sparse. “Now our hills are useful, our fields became useful,” says driver Ajbir Shah. “It is a huge benefit for us.”

Further north, in Khyber-Pakhtunkhwa’s Swat, many of the high valleys were denuded by the Pakistani Taliban during their reign from 2006 to 2009. Now they are covered in pine saplings. “You can’t walk without stepping on a seedling,” smiles Yusufa Khan, another forest department worker.

The Heroshah and Swat plantations are part of the “Billion Tree Tsunami,” a provincial government program that has seen a total of 300 million trees of 42 different species planted across Khyber-Pakhtunkhwa. A further 150 million plants were given to landowners, while strict forest regeneration measures have allowed the regrowth of 730 million trees—roughly 1.2 billion new trees in total, the program’s management says.

Kamran Hussain, a manager of the Pakistani branch of the World Wildlife Fund, who conducted an independent audit of the project, says their figures showed slightly less—but still above target at 1.06 billion trees. “We are 100 percent confident that the figure about the billion trees is correct,” he told AFP, highlighting the transparency of the process. “Everything is online. Everyone has access to this information.”

The program has been praised by the head of the Swiss-based International Union for Conservation of Nature (IUCN), a green NGO, which called it a “true conservation success story.” Initially mocked for what critics said were unrealistic objectives, it is a welcome change to the situation elsewhere in the country.

Pakistani authorities say just 5.2 percent of the country is covered by forest, against the 12 percent recommended by the United Nations. Just one big tree remains in the poverty-stricken village of Garhi Bit in the southern province of Sindh, shading its small mosque. It has stood there for a century, locals say.

“Before, there were big trees, many kinds of them,” says Dad Mohammad, a 43-year-old farmer. “But they started to dry because of the lack of water, so we cut them,” he says, pointing to hundreds of meters of cultivated land where previously there stood a forest.

More than 60 percent of the forests lining Sindh’s riverbanks have disappeared in the last 60 years, mainly due to river depletion and massive logging during the 1980s, says Riaz Ahmed Wagan, of the provincial forest department. “It is a disaster,” he says, adding that forestry remains the lowest priority on the agenda of the provincial governments.

The Billion Tree Tsunami, which cost the Khyber-Pakhtunkhwa government $169 million, started in November 2014. Officials say they are still implementing maintenance safeguards such as fire protection, with the project due to be completed in June 2020. In early 2017, the federal government announced its own Green Pakistan Project, which aims to plant 100 million trees in five years across the country. It ranges from “legislative reforms” to “wildlife protection,” according to its leader Ibrahim Khan, who works under the authority of the ministry for climate change. More than a quarter of the work was done by the end of April this year, he says.

Khyber-Pakhtunkhwa is ruled by Pakistan Tehreek-e-Insaf, the political party headed by former cricketer Imran Khan, which is the main challenger to the ruling Pakistan Muslim League (Nawaz) as the country heads into general elections next month.

Khan has vowed to make the environment an election issue, and to plant a total of 10 billion trees across the country. “Every child in Pakistan should be aware of the environmental issue which, until now, has been a non-issue,” he told AFP.

But it is yet to be seen whether his ambitions will translate into votes.

Pakistani environmental lawyer and activist Ahmad Rafay Alam says that in a country where the electorate is often swayed by infrastructure projects rather than the environment, he has doubts. “It would be a first,” he said.