Green Light Given for Egypt’s Mubarak to Walk Free 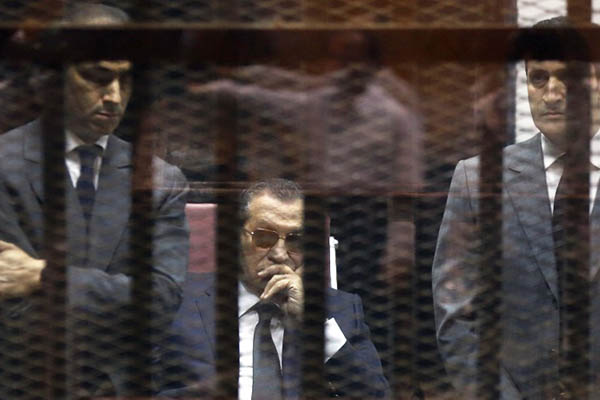 The release of Egypt’s ex-president Hosni Mubarak approved on Monday ends “talk of the Arab Spring” uprising that toppled him in 2011 after 30 years in power, an analyst said.

An Egyptian prosecutor approved a request by Mubarak’s lawyer for his release after a top court acquitted him of involvement in the killing of protesters during the popular revolt. Mubarak’s expected release comes as many leaders of the 2011 protests that ousted him linger in jail but members of his former regime walk free.

Six years on, critics say the abuses they fought under Mubarak have returned with President Abdel Fattah al-Sisi, the former army chief who toppled Mubarak’s Islamist successor after just a year in power. “Talk of the Arab Spring has completely stopped,” said Mai Mogib, a politics professor at Cairo University. But “discussing Mubarak and symbols of his era has become acceptable in the media and in the street,” she said.

Mubarak’s lawyer said Monday the 88-year-old was free to go home after having spent most of his time since his arrest in 2011 detained at a military hospital in Cairo. “He can go home now when the doctors decide he is able to,” Farid al-Deeb told AFP, adding that the ex-president is however banned from leaving the country pending an ongoing graft investigation.

Mubarak’s sons have already been released from prison, and most of the charges brought against the ex-president’s regime members have been dismissed. “He’s in a better position than all other presidents who faced the Arab Spring” uprisings, Mogib said.

Mubarak had been accused of inciting the deaths of protesters during the 18-day revolt, in which about 850 people were killed as police clashed with demonstrators. But Egypt’s top appeals court on March 2 acquitted him of involvement in the killings.

Mubarak was sentenced to life in 2012 in the case, but an appeals court ordered a retrial, which dismissed the charges two years later. His acquittal this month, which is final, has angered relatives of those killed in 2011.

“Our son’s blood was spilled for nothing,” said Mostafa Morsi, whose son was shot dead aged 22 on Jan. 28, 2011. “I wish Mohammed had lived to work, marry and have children,” his father said.

Several key activists in the 2011 uprising are now serving lengthy jail terms, and rights groups say hundreds of others have been forcibly disappeared. The anti-Mubarak revolt ushered in instability that drove away tourists and investors, taking a heavy toll on the economy.

In the street and on television talk shows, Egyptians now mainly discuss the faltering economy and rising prices instead of politics.

Prosecutors had leveled various charges against Mubarak following his February 2011 resignation. In January 2016, the appeals court upheld a three-year prison sentence for Mubarak and his two sons on corruption charges. But the sentence took into account time served. Both of his sons, Alaa and Gamal, were freed.

In another investigation into whether Mubarak had received gifts unlawfully, prosecutors have appealed a decision by an investigating judge to drop a probe against him.

A former air force chief and vice president, Mubarak became president after jihadists shot dead president Anwar Sadat at a military parade in 1981, in an attack in which he was himself wounded.

Islamist president Mohamed Morsi, Egypt’s first freely elected civilian leader, served for just one year before the military toppled and detained him in 2013 amid mass protests against his rule. The authorities then launched a deadly crackdown on Morsi’s backers.

Hundreds including Morsi were sentenced to death after speedy mass trials, although courts have since overturned many of the convictions.

Morsi’s overthrow sparked a jihadist insurgency, mainly in the province of North Sinai, that has killed hundreds of policemen and soldiers. The insurgency, including attacks that have reached Cairo, have led Sisi to argue that while he supports human rights, the dangers facing Egypt also require a firm hand.