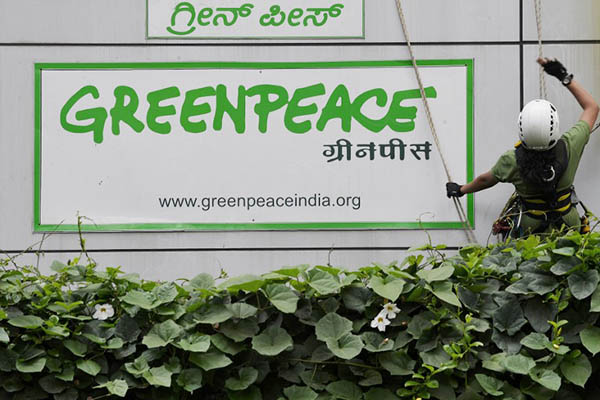 Environmental group says their operating license has been cancelled.

Greenpeace said Friday Indian authorities have scrapped its license to operate in the country, the latest in an ongoing battle between the environmental group and Prime Minister Narendra Modi’s government.

Greenpeace said it had received an order from the southern Tamil Nadu state’s Registrar of Societies department summarily announcing the cancellation of its registration as a society.

The NGO is at loggerheads with the Modi-led government over claims of environmental damage caused by India’s heavy reliance on coal and the impact of deforestation and nuclear projects. In a statement, senior Greenpeace India official Vinuta Gopal said the move “is the latest assault on free speech in India.”

“The RoS [Registrar of Societies] is clearly acting under directions from the Ministry of Home Affairs in Delhi, which has been trying to shut Greenpeace India down for over a year now,” Gopal said. “This is an extension of the deep intolerance for differing viewpoints that sections of this government seem to harbor.”

The Home Affairs Ministry was not immediately available to comment on the allegation.

A spokesperson of the group told AFP that it would challenge the order in court.

Non-governmental organizations can have licenses in multiple Indian states, but the cancellation of Greenpeace’s only license means it cannot operate in India unless the order is reversed.

Modi’s government in April suspended Greenpeace’s foreign funding license and froze its domestic bank accounts, which the group had said could force it to shut down. The government had said it was acting on an audit, which showed the organization had violated rules on foreign funding and had not disclosed transaction information.

In previous months Greenpeace accused Indian authorities of placing its campaigners on suspicious persons list and barring their exit and entry into the country. One of the group’s senior campaigners was offloaded from a flight to London, where she was scheduled to address British M.P.s.

The latest decision marks another setback for foreign charities operating in India, after the country placed the U.S.-based Ford Foundation and Christian charity Caritas on a watch list. Modi’s nationalist government, in power since last year, has cancelled the foreign funding licenses of around 9,000 charities since a major crackdown began in April.

According to Indian media, a secret report by India’s main intelligence agency warned that delays to key development projects being sought by Greenpeace and other activist groups could knock up to three percentage points off India’s annual growth rate.