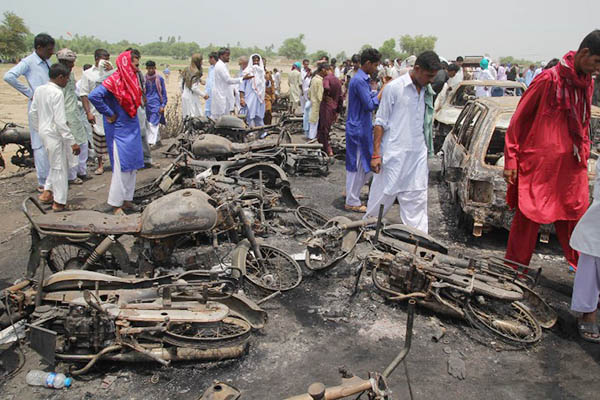 Pakistan in mourning as 139 dead, over 100 others injured in oil tanker fire

Pakistan began Eid in mourning on Monday as the death toll from an oil tanker explosion rose to 153, with scores more injured after they were caught in a fireball while scooping up spilt fuel.

Dozens of grief-stricken relatives waited outside hospitals in Bahawalpur, the nearest major city to the disaster, to claim the bodies of their loved ones as Prime Minister Nawaz Sharif arrived to visit victims. Around a dozen of them, carrying the blackened remains of two victims wrapped in white cloth on charpoys, tried to reach the prime minister in protest but were stopped by security personnel a few meters away.

The tanker overturned early Sunday on a main highway from Karachi to Lahore while carrying some 40,000 liters of fuel. It exploded as crowds gathered to scavenge for fuel, ignoring warnings to stay away. The accident quickly drew scores of people from a nearby village, many armed with whatever containers they could find despite warnings from the driver and police of the danger. Minutes later the tanker exploded, engulfing the crowd as well as dozens of other vehicles in a massive fireball that sent a plume of thick smoke into the sky.

“The death toll has climbed to 153, and many are in critical condition in various hospitals in Bahawalpur and Multan,” Javed Iqbal, chief of Victoria Hospital, told AFP. The tanker driver survived the crash and was later taken into custody.

Senior police official Raja Riffat told AFP he had been charged with careless driving. He added that, according to the driver’s statement, he “lost control of the vehicle” after trying to avoid a speeding oncoming van.

The driver told police he had warned people stay away from the truck because he feared it would catch fire “but nobody listened.”

Relatives waiting outside the hospital could not contain their grief. Mumtaz Mai, a 40-year-old widow who lived with her two nephews, was beating her chest and screaming after both were lost in the fire. “My world has come to an end,” a weeping Mai told AFP, adding that they had been so badly burnt she was unable to recognize their bodies. “Where will I go now, with whom will I live? My life is but a curse,” she lamented.

Muhammad Ayub, in his early 50s, lost his brother and nephew. “We have been doomed. How can we celebrate Eid and what would it mean to us when we cannot even recognize the dead bodies of our loved ones?” he asked.

Pakistanis were already grieving for 77 people killed in a series of militant attacks on Friday, unnerving citizens ahead of Eid, one of Islam’s holiest festivals.

The country has an appalling record of fatal traffic accidents due to poor roads, badly maintained vehicles and reckless driving. It has also long struggled to alleviate a chronic energy crisis, with regular blackouts crippling industry and exacerbating anger against the government.