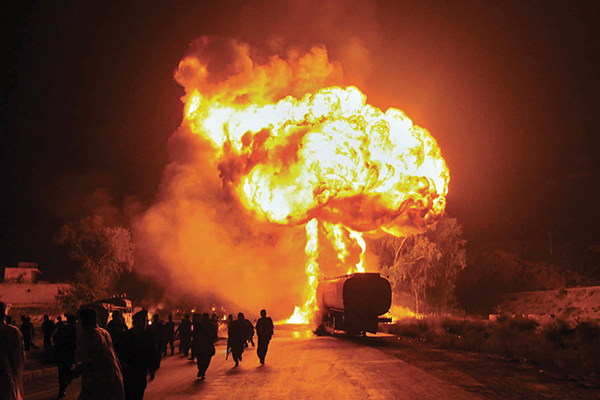 Now that Islamism and its extreme form, terrorism, have become familiar to the world, one must anticipate what’s coming next. This is especially true for the West, home to many easily radicalized expat Muslims. Jason Burke’s thought-provoking latest book, The New Threat from Islamic Militancy, lays out the scenario while analyzing the recent experience of Europe. Unfortunately, most cases link up with Pakistan as the training ground or inspiration for acts of terrorism in Britain and France.

Burke explores many reasons for Islamic expat militancy: the rise of Islamic revolutionary Iran challenging the ‘crusading’ West and ‘Jew-loving,’ hegemonic America; the emergence of Afghanistan as a set-piece battle between Islam and the West; the expat Muslim facing identity crisis in the West and reaching out to his or her “home” country undergoing radical Islamic revival; the availability of information technology in a globalized world encouraging introversion in socially isolated Muslim youths in the West; and the outreach of the radical cleric into multicultural Western societies.

Alas, Pakistan becomes ground zero for terrorist training and an ideological funnel for the battlefield of Afghanistan, where the actual jihad is unfolding. The big trauma for Britain was the 2005 attack on the London Underground. Why was Britain, with a Muslim population of 2.7 million, targeted, but France, with a Muslim population of 5 million, spared? The reason was France’s opposition to Israel’s policy toward the Palestinians and its refusal to fall in line behind the U.S. while Britain stayed close to its transatlantic partner. But France caught up later as the conditions in which the Maghreb Arabs lived there ghettoized them and made them isolated and angry. Also, compared to Britain, France carried out better intelligence surveillance over an expat population that no longer integrated.

The Balkans, too, provided inspiration, as seen in the person of Ahmed Omar Saeed Sheikh, radicalized as an aid worker in Bosnia, where Muslims were being murdered by Serb nationalists. Born in England to Pakistani expat parents, Sheikh’s next stop was Pakistan, which was then fighting its covert war against India in Kashmir. He was caught and put in jail in India after violent acts of extraordinary daring but was sprung from prison through a plane hijacking. He was implicated in the murder of American journalist Daniel Pearl in Karachi, where the latter had gone to interview the much-pampered terrorist-spiritualist Mubarak Ali Gilani alias Mubarak Shah, head of a semi-jihadist outfit called Al Fuqara, whose member Richard “Shoe-bomber” Reid, a converted Briton, had attempted to blow up an American airliner in 2001 after being trained in Afghanistan and Lahore.

Sheikh was deeply involved with Al Qaeda and was prized for his contacts within the Pakistani establishment. Historian Ayesha Jalal in her latest book, The Struggle for Pakistan: A Muslim Homeland and Global Politics, writes: “Two days after America started cluster-bombing the hapless Afghans, Musharraf ousted [Lt. Gen. Mahmud Ahmed], chief of Inter-Services Intelligence. There have been allegations that the move became unavoidable once India supplied evidence to the Americans confirming links between the World Trade Center hijackers and the ISI chief. The go-between was Sheikh, a British national and graduate of the London School of Economics who was one of the three militants released by India after the Kandahar plane hijacking. Sheikh had allegedly wired $100,000 to Mohammad Atta, one of the 19 hijackers on 9/11, at the alleged behest of the Pakistani spymaster.”

The first Islamist-terrorist assault came not in the U.K. but in Madrid in 2004 which killed 200, but the one that really shook the world next to only 9/11 was the July 2005 bombing of trains and a bus in London by four suicide-bombers that killed 52. The leader of the four was Mohammad Siddique Khan, born in England to Pakistani expat parents, who went to Pakistan and trained as a killer in its various mujahideen camps. In his charge were two more British-born Pakistanis, Shahzad Tanveer, 22, and Haseeb Hussain, 18. Both also trained in Pakistan. The remains of Tanveer were sent back to Pakistan by a “sympathetic” British government—no one wants to lose the Pakistani vote—to be buried as a “martyr” in his ancestral village in the Punjab. Neither in Pakistan nor in the U.K. did Muslims believe for a minute that the boys had committed terrorism; they believed it was a Zionist-Western conspiracy, like 9/11.

Then Rashid Rauf, a Pakistani baker’s son from Birmingham, confessed after being arrested in Bahawalpur that he had brought the London bombers to Pakistan and trained them. Then the plot thickened. Rauf was found to be related through his wife to Maulana Masood Azhar, head of Jaish-e-Mohammed, an Al Qaeda-linked terrorist militia whose presence in Bahawalpur has been consistently denied by Islamabad. Azhar was rescued from an Indian jail—he had gone to India on a false passport from Sudan, where he had accompanied Osama bin Laden—through a hijacking that also sprang Sheikh, who is today on death row in a Hyderabad jail but can’t be hanged for reasons that remain a mystery. Rauf was allowed to escape in 2007 while being taken from a court in Islamabad to his prison in Rawalpindi: riding in a relative’s car with a police escort, he first got off “for a burger,” then was allowed to dismount “for prayers,” after which he disappeared. He died in a drone attack in 2008 in North Waziristan.

The case of Muhammad Merah is a dramatic moment in Burke’s book. He took revenge on France by killing a child, a Rabbi’s daughter: “Surveillance footage shows how the gunman chased her, caught her by the hair, put the muzzle of his weapon to her forehead, changed it for another when it jammed, put that gun too to the girl’s temple and killed her.”

Merah was a petty offender in Toulouse who graduated ultimately to the status of Soldier of Islam by coming to Pakistan: “In August 2011, Merah flew from Paris to Lahore. The city had long been a favorite destination for young men seeking an entry into Islamic militancy and a center of extremist activism. One of the best-known local groups, based in a sprawling complex just south of the city, was Lashkar-e-Taiba, which had [allegedly] carried out the 2008 attacks on luxury hotels, a Jewish center, a tourist café and commuters in Mumbai. Another was Harkat-ul-Mujahideen. The two groups, which had their origins in the long conflict between India and Pakistan over Kashmir, both had significant training facilities and a history of recruiting foreigners. Elements of both had become significantly closer to Al Qaeda and similar international or transnational groups based in Pakistan since 2001. It is possible that Merah made contact with someone from one of these two organizations who dispatched him 180 miles across the country to Islamabad with an introduction to a mosque in the capital well known for its extremist sympathies.” You can guess the name of this mosque; it helped oust Pakistan’s “secular” military president Gen. Pervez Musharraf in 2008.

Then there is the case of Mustafa Setmariam Nasar, alias Abu Musab al-Suri, of Aleppo, today known as the strategist of terror and therefore more important to jihad than even bin Laden and Abu Bakr al-Baghdadi. Driven out by the Syrian regime, he wound up in Pakistan in 1988, supporting local fighters and Arab volunteers in Afghanistan from Peshawar, “where he knew bin Laden and Ayman al-Zawahiri but maintained his distance from both.” The ideologue came into his own with his 1,600-page work, The Call for Global Islamic Resistance. Al-Suri was finally the inspiration of at least a thousand terrorist recruits in the U.K. after the 2005 London attack.

Others who provided inspiration were Omar Bakri Mohammed—a Syrian-born cleric who came to the U.K. in the mid-1990s creating two lethal organizations that were to poison life in Pakistan—and Anwar al-Awlaki, who established a global Internet outreach and caused people to kill, from Africa to Boston and Texas. Bakri fathered the Hizb ut-Tahrir and Al Muhajiroun organizations in the U.K. and penetrated all levels of society in Pakistan, including the Army.

Brig. Ali Khan, director of rules and regulations at the Army’s General Headquarters, Rawalpindi, was court-martialed in 2011 along with four other Army officers “for having links with Hizb ut-Tahrir propagating the setting up of an Islamic caliphate.” The case of Col. Shahid Bashir—Commanding Officer of Shamsi Air Force Base used by the American force in Afghanistan—was worse. He was apprehended by the military police in 2009 for “links with this banned pan-Islamic political outfit, Hizb ut-Tahrir.”

Burke also refers to a 2010 case when a member of British Parliament was knifed in the stomach by a young British-Pakistani woman angered by his support for the Iraq war. Roshanara Chaudhry later told police that she had carried out the attack because as Muslims “we’re all brothers and sisters and we should all look out for each other and we shouldn’t sit back and do nothing while others suffer.” She had spent hundreds of hours taking in video lectures by al-Awlaki, the Yemen-based extremist American preacher. She was sentenced to life imprisonment amid shouts of “Allah-o-Akbar,” “British go to hell” and “Curse the judge” from the public gallery of the court.

Al-Awlaki was killed in 2011 along with Samir Khan, the Pakistani editor of Internet magazine Inspire, which has spawned many killers, including Boston marathon bomber Dzhokhar Tsarnaev and a Pakistani boy inspired to violence by this e-source of jihad. Last May, police shot dead Nadir Soofi—a Pakistani-American born to a conservative, religious Pakistani father from a “military family”—and his accomplice, Elton Simpson, as they launched a Kalashnikov attack on a blaspheming-cartoon contest in Garland, Texas. Soofi was brought up normally by his white mother but, growing up, discovered his Muslim roots in Inspire and the Internet harangues of al-Awlaki.

Today, British Muslim girls are abandoning their schools to go for jihad and romance in Syria where “brave and handsome” Muslim boys are fighting a civil war in the name of jihad. The irony is no longer lost on a frightened world: Syria is expelling refugees into Europe that the U.K. will have to share with other EU members. As the new refugees settle down, their children will likely repeat the routine of radicalization, ending in violence and long-distance jihad. Meanwhile, Pakistan is coping, not too successfully, with the loss of internal sovereignty it allowed as the price for becoming the ground zero of jihad.