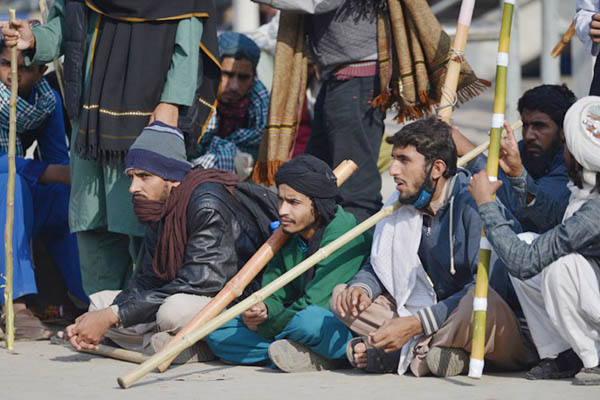 An Islamabad court warned authorities on Monday to obey its order to shut down a protest by a little-known hardline religious group, which has sparked widespread anger by virtually bringing the capital to a halt for two weeks.

The Islamabad High Court said it would hold officials in contempt if they did not launch a crackdown, as enraged commuters called for the roads to be opened and critics accused the government of creating a dangerous precedent by failing to take a tough stance. The roughly 2,000 protesters from the Tehreek-i-Labaik Ya Rasool Allah Pakistan group have blocked a main highway used by thousands of commuters since Nov. 6, causing hours-long traffic snarls.

The government insisted on negotiating with the demonstrators, who are a small group by Pakistani standards, even after the court issued an order for the roads to be cleared by last Saturday.

“This is a very serious situation,” a written statement from the court said Monday. It blasted the lack of progress as “beyond comprehension” and said the suffering of citizens had reached its limit.

The protesters are demanding the resignation of federal law minister Zahid Hamid over a hastily abandoned amendment to the oath election candidates must swear. Demonstrators have linked it to blasphemy—a highly contentious issue in mainly Muslim Pakistan—and claim the oath was softened to enable the participation of Ahmadis, a long persecuted Islamic minority sect.

Interior minister Ahsan Iqbal insisted negotiations would continue. “We want to resolve this issue immediately and peacefully. Pakistan cannot afford any unrest,” he told reporters in Islamabad on Monday.

Protesters at the demonstration, where young men armed with clubs are refusing to let vehicles pass and at times pelting those who come near with stones, were defiant. “We are here until he resigns, we will not go,” said Pir Muhammad Ijaz Ashrafi, a spokesman for the party, warning that if the government acted against them it would “not survive.”

Others warned that if the government does move to disperse the protesters, rallies could spread throughout the country.

Analysts said authorities had bungled their response and created an unhelpful precedent. “This was a regular protest, attended by a very small crowd. However, the government dragging its feet, turning it into a protracted engagement, has given it a lot more weight than it needed,” said Zeeshan Salahuddin, of the Center for Research and Security Studies. He added that “anytime anyone is upset with the government, the capital may be choked and the government will bend its knees.”

Retired general Talat Masood said the response had been “spineless.”

“If they continue with this situation, [the protesters’] demands will keep on increasing, which is very dangerous,” he said.

Columnist Zahid Hussain said the fears of violence were overblown. “There is a false sense of fear that the situation can get out of control. The government should set up a writ and take an action against them,” he told AFP. “They should have not been allowed to come to this stage.”