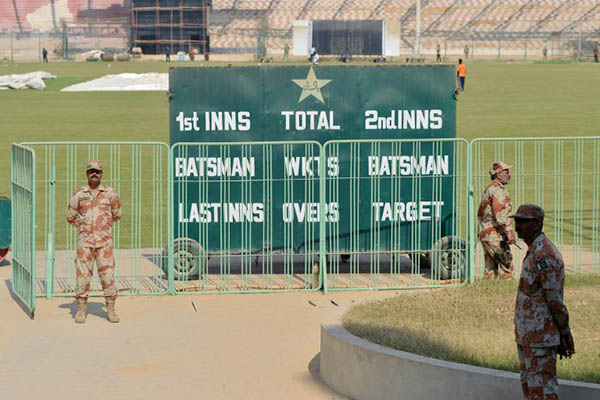 Thousands of security personnel will be deployed when Karachi hosts the final of the Pakistan Super League on Sunday—its biggest cricket match in nine years, after a spate of attacks drove away foreign teams.

Although some overseas players opted out, authorities have promised head-of-state level security at the National Cricket Stadium when Peshawar Zalmi take on Islamabad United. The Twenty20 match has great significance for Pakistan as it gradually welcomes back international cricket, which ground to a halt after a deadly attack on Sri Lanka’s Test team in Lahore in 2009 which killed eight people and injured seven visiting players.

As well as the final in Karachi, both eliminators were held in Lahore this week—a step forward from last year, when only the final was held on Pakistani soil.

Karachi will also host three Twenty20 internationals between Pakistan and the West Indies in early April, the first home series involving a Test-level team since 2009. Next year, the Pakistan Cricket Board has said it hopes to hold half of the PSL on home turf. Currently, most of the games are played in U.A.E.

Despite the encouraging signs, some of the PSL’s top stars preferred not to play in Pakistan, including Quetta Gladiators batsman Kevin Pietersen who appeared to announce his retirement instead.

Australia all-rounder Shane Watson also opted out for Quetta, who were knocked out by Peshawar. Quetta head coach Moin Khan said players who promise to play in Pakistan but later back out should be barred from the PSL draft. “It’s disappointing that some foreign players refused to come after giving their consent initially,” he said. “PCB will have to take notice and not include those players in draft as it will be big loss for the franchise.”

England’s limited-overs captain Eoin Morgan was another to skip Pakistan, while England’s Alex Hales and Sam Billings will both be missing for Islamabad United when they take on Peshawar on Sunday.

Pakistan has pulled out all the stops for the PSL, to the extent of using helicopters to dry the rain-sodden Lahore pitch for Wednesday’s semi-final. The last time a helicopter was seen hovering so close to Gaddafi Stadium was in 2009, when one was used to airlift the survivors of the Sri Lankan team attack to safety.

But foreign experts who examined the security arrangements said they were “as good as any” they have seen. Former West Indian captain and Pakistani crowd favorite Darren Sammy, who will skipper Peshawar for a second time after leading them to victory last year, lauded the country’s efforts. “Pakistan is a place where I have a great connection and I feel proud that I am part of the efforts to revive international cricket in Pakistan,” he said.

The cricket-mad country has since played nearly all its home matches in the United Arab Emirates, where earlier rounds of the PSL were also staged. But authorities have been working hard to ease international cricket back to Pakistan, with the final of last year’s PSL in Lahore seen as a major turning point.

That was followed by three T20s against a World XI last September and the emotional return of Sri Lanka for one T20 in October, all in Lahore, with unprecedented security arrangements in place.

The success of the Lahore events has long spurred calls for similar efforts in Karachi. Many Pakistani greats grew up playing cricket on the sweltering port city’s chaotic streets, often using an improvised form known as tape-ball, using a tennis ball wrapped in electrical tape.

The city’s most popular player, former Pakistan captain Shahid Afridi, said the PSL final was “great news,” adding: “Karachiites will enjoy the occasion and I am glad over it.”

The third edition of the PSL was launched last month with the addition of a sixth team, the Multan Sultans, more international stars, and hopeful fans eager to forget a spot-fixing scandal, which tainted last year’s event.

After the first 31 matches were played in Dubai and Sharjah, the PSL moved to Lahore on Tuesday, when Peshawar beat Quetta in the first eliminator and then ousted the Karachi Kings in the second. The Lahore matches were played under heavy security, with police and paramilitary personnel guarding the teams from their hotel to the stadium and back.