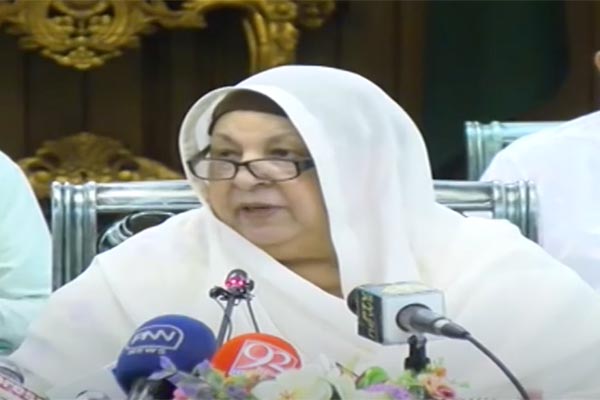 The spread of the coronavirus in Gujranwala continues to be alarming, Punjab Health Minister Dr. Yasmin Rashid warned on Sunday, as she sought to reassure the public that provincial authorities were endeavoring to expand facilities to prevent an adverse situation.

“If we have a problem right now, it is Gujranwala,” she told a press conference in Lahore, noting that the city had nearly 100 percent occupancy of ventilators right now. To address the issue, she said, the provincial health department had sent five additional ventilators to the city, adding that ambulances equipped with ventilators were also being prepared to transport patients from Gujranwala to Lahore if needed.

“We held a meeting with the private sector in Lahore three days ago and received a very positive response … We are receiving support of 300 beds and 30 ventilators from them, which they have said they will not take charges for,” she said, adding that private-sector hospitals would shortly fix charges for COVID-19 treatment to prevent complaints of overcharging.

The health minister noted that provincial capital Lahore’s occupancy rate of ventilators was currently at 81.5 percent, but the situation was improving thanks to the district administration’s ongoing efforts to ensure strict compliance with standard operating procedures (SOPs). She said that 30 areas of the city were currently under “smart” lockdown. “On April 25, we had 1,340 patients admitted in hospitals and today we have 1,149. [Similarly] Occupancy of oxygen beds was 72 percent, now it is 42 percent,” she added.

To prepare for a potentially worsening situation, she said the provincial government had provided an additional 50 ventilators to public sector hospitals in Lahore, and reassured citizens that thus far there had been no interruption in oxygen supplies. She said that the government was preparing a 280-bed high dependency unit at Lahore’s Expo Center with 10 new ventilators as a “backup option” if the city’s hospitals came under strain.

Overall, Rashid said, district headquarters hospitals across Punjab had 2,730 beds tasked for COVID-19 patients, of which 600 were currently occupied. The DHQs have 97 ventilators, of which 20 are currently in use, she added.

In the rest of the province, said the health minister, the highest ventilator occupancy was in Multan at 88 percent; Sargodha at 80 percent, Bahawalpur at 52 percent; Dera Ghazi Khan at 39 percent; and Faisalabad at 38 percent. She said the government had initiated the process of procuring oxygen generators for teaching hospitals, adding industries had also pledged to curb their supplies if required.

According to Rashid, the provincial government administered 78,000 doses of coronavirus vaccines on Saturday, against a National Command and Operation Center target of 80,000/day. She said vaccination centers had witnessed an uptick in the number of people seeking inoculations since the government allowed walk-ins for people aged 50 and above.

She said that around 219,000 healthcare workers had been vaccinated thus far, adding that the government was planning to add seven more vaccination centers in major urban centers to reduce overcrowding. “The vaccines available are Sinopharm, CanSino and Sinovac. We received 2.1 million doses; of which 820,000 are left right now,” she said, adding that the [federal] government should receive 2 million additional doses by May 10.

Of the provincial government’s independent procurement of vaccines, she said the bidding process had started and should be completed on May 11, following by delivery within a month.

To a question, she said that in Punjab 90 percent of all new infections were of the British variant, while 10 percent appeared to be of the original Wuhan strain. She claimed only one instance each of the Brazilian and South African variants had been found, and dismissed concerns of them spreading through the province.

Rashid also sought to deny reports of the vaccines being ineffective against the new strains of COVID-19. “Let me be clear, the vaccine we are giving, the Chinese vaccine we are administering, have been approved globally. These vaccines are completely effective against the U.K. variant. The basic configuration of coronavirus will remain the same. When mutations come, they will be studied, because it is a rapidly evolving virus,” she added.