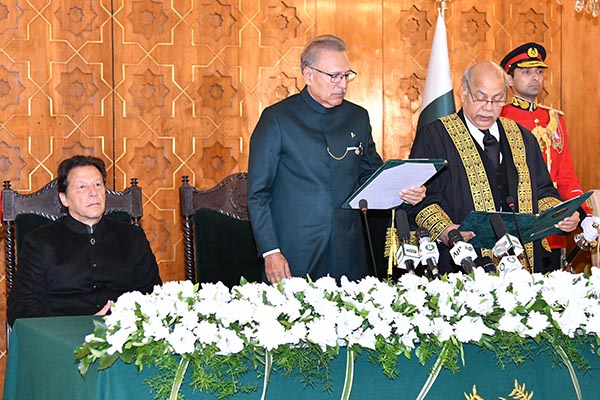 Justice Gulzar Ahmed on Saturday took oath as the 27th Chief Justice of Pakistan, taking the reins of the judiciary from Asif Saeed Khosa, whose tenure ended at midnight on Dec. 20.

The ceremony commenced with a recitation of the holy Quran, after which the oath of office was administered and the prime minister and president congratulated the new Chief Justice on his post.

Justice Gulzar replaced Justice Khosa, who served as Pakistan’s top judge for approximately 11 months, during which the court deliberated on several important cases, including the high treason trial of former Army chief Pervez Musharraf, and the legal lacunae concerning an extension to the tenure of incumbent Army chief Gen. Qamar Javed Bajwa.

Justice Gulzar would retire in February 2022, giving him over two years at the head of the apex court, and would be replaced by Justice Mushir Alam, who is the next senior-most judge.

Born in Karachi on Feb. 2, 1957, Justice Gulzar was educated at the Sindh capital’s Gulistan School. He obtained his Bachelor’s degree from Government National College, Karachi, and his LLB from SM Law College, Karachi.