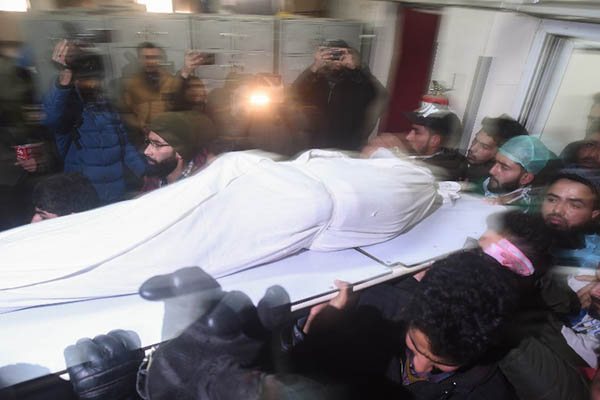 Seven civilians were killed as Indian troops fired on protesters on Saturday after a gunfight left three armed rebels and a soldier dead in the disputed region of Kashmir, police and hospital officials said.

The fighting erupted soon after troops laid siege to a house in the southern Pulwama area in India-administered Kashmir where the rebels were hiding, a police officer said.

Three armed rebels—including a former soldier who had joined them—then jumped out of the house into an orchard to fight the soldiers and were killed. The fighting also left a soldier of the Indian army dead, senior police officer Swayam Prakash Pani told AFP.

While the gunfight was in progress, hundreds of villagers poured out on to the streets in freezing cold and marched towards the orchard, shouting slogans in support of the militants and throwing stones at the troops, witnesses said.

“It was mayhem. Six protesters died in the ensuing firing by soldiers,” a police officer told AFP, speaking on condition of anonymity.

Authorities suspended mobile internet services in many areas of the restive territory, including in the main city of Srinagar. A large number of students also held protests against the killings. Protests spread to the old quarters of Srinagar and the northwestern town of Sopore.

Saturday’s bloodshed capped the deadliest year in the region since 2009, with nearly 550 killed so far including some 150 civilians, according to a monitoring group.

Security officials say some 230 rebels have been killed this year, most of them locals from the Kashmir valley, but rebel groups have recruited new members at a matching pace. Popular support for the rebels and their cause has increased since the killing of a charismatic leader in 2016.

Villagers, sometimes in their thousands, have been swarming sites of gun battles with government forces to help the rebels escape from military cordons.

Kashmir has been divided between India and Pakistan since the end of British colonial rule over the subcontinent in 1947. Both claim the disputed Himalayan territory in full. Rebel groups have fought for decades about 500,000 Indian soldiers deployed in the territory New Delhi controls, seeking Kashmir’s independence or its merger with Pakistan.

New Delhi regularly accuses Pakistan of arming and training rebels to launch attacks on Indian forces, an allegation Islamabad denies saying it only provides political and diplomatic support to Kashmiris fighting for the right to self-determination.

Separatists opposed to Indian rule of Kashmir called for a three-day general strike to protest Saturday’s killings and announced a march on Monday to the military headquarters in Srinagar.

Mirwaiz Umar Farooq, a senior member of the unified Joint Resistance Leadership group, took to Twitter to vent anger at government action, saying the Indian forces should “kill all of us at one time rather than killing us daily.”