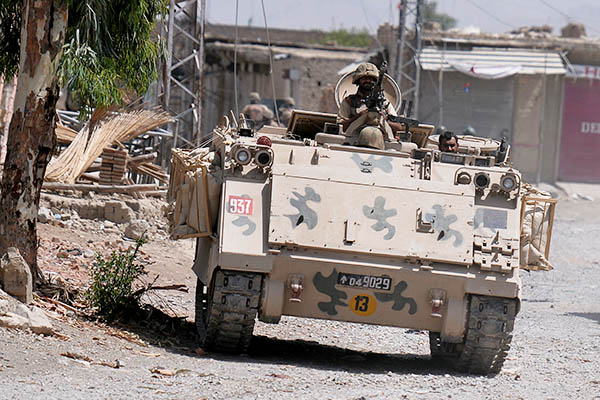 Five Pakistani soldiers and 11 militants killed on Tuesday, while another 35 killed on Wednesday in early morning airstrikes in Shawal.

Five Pakistani soldiers were killed Tuesday in gunfights with militants during an army offensive against insurgent hideouts in a northwestern tribal area, the military said.

The two clashes happened near the town of Mir Ali in North Waziristan, where the Army is in the midst of a major operation to clear the area of militants and their strongholds. The military said two soldiers were killed “in an intense exchange of fire with terrorists in and around Mir Ali,” while three others were killed in a gunfight with militants in the nearby Fateh Khel area. Eleven militants were killed in the clashes, the military added.

Early on Wednesday, the military announced that another 35 militants had been killed while trying to flee aerial strikes in the Shawal area of North Waziristan.

The area is off-limits to journalists, so the number and identity of those killed cannot be independently verified.

A security official told AFP that the army had begun ground operations in the Mir Ali and nearby Dattakhel areas on Monday.

The military launched the long-awaited offensive last month to try to wipe out longstanding militant strongholds in North Waziristan, which borders Afghanistan. Jets and artillery began hitting rebel targets on June 15 to try to regain full control of the district after years of pressure from Washington and other powers.

More than 400 militants and 23 soldiers have been killed in the assault so far, according to the military.

Pak Army is fighting the survival battle for pakistan or else Taliban enforced rule .Let us join hands with our soldiers and help out IDPs who choose to sacrifice all they had for safer pakistan. we should be indebted to these men ,women ,children, sick & wounded people.Let ALLAH ALMIGHTY give us success in operation Zar-be -Azab (Ameen)