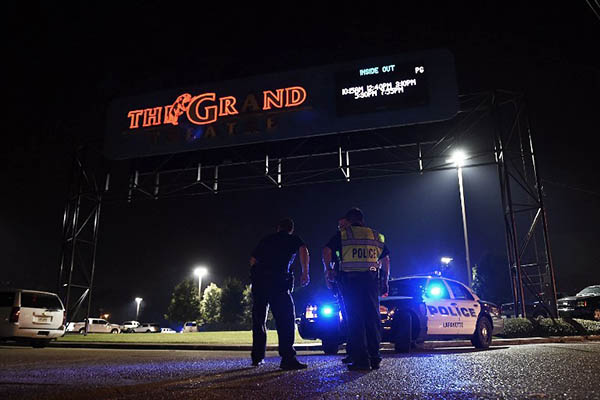 More than 100 people were in the theater when the gunman began shooting randomly with a handgun about 30 minutes into a showing of Trainwreck at the Grand 16 theater in Lafayette, Louisiana, police said. Nine people were injured, some critically.

President Barack Obama said earlier Thursday that a “distressing” lack of progress on gun control legislation had been the greatest source of frustration during his time in office. “If you look at the number of Americans killed since 9/11 by terrorism, it’s less than 100. If you look at the number that have been killed by gun violence, it’s in the tens of thousands,” he said in an interview with the BBC taped before the shooting. “And for us not to be able to resolve that issue has been something that is distressing.”

This latest mass U.S. shooting comes as a jury deliberates the death penalty for the gunman in a 2012 theater massacre in Colorado that left 12 dead and 70 injured.

Louisiana Governor Bobby Jindal rushed to Lafayette late Thursday, where he held a press conference not far from the shooting scene. “Whenever we hear about these senseless acts of violence it makes us both furious and sad at the same time,” Jindal told reporters. “There’s no good reason why this type of evil should intrude on the lives of people who are just out for entertainment.”

Jindal met with some of the victims at a local hospital and praised their “selfless heroism.” One teacher was badly wounded after throwing herself in front of a friend to shield her from the bullets. The friend was shot in the leg, but managed to “have the presence of mind” to pull a fire alarm in an effort to warn others of the danger, he said. “Even in the worst of times, it brings out the best in people,” Jindal told reporters.

Jindal, who is one of a crowded field of contenders vying for Republican presidential nomination, said it was not the right time to discuss gun control and that the focus should be on the victims.

The Louisiana shooting comes almost exactly three years after James Holmes, 27, opened fire on a packed screening of The Dark Knight Rises in Aurora, Colorado, in a meticulously-planned attack during which he wore body armor and used tear gas to prevent victims from escaping. It also comes a week after Mohammad Youssuf Abdulazeez, 24, opened fire on two military centers in Chattanooga and killed four U.S. Marines and a Navy sailor before dying in a shootout without police.

Police said they have identified Thursday’s shooter as a 58-year-old white male, but did not release his name.

Authorities said the shooting victims ranged in age from late teens to the 60s, and said police are still in the process of notifying their relatives.

Lafayette Police Chief Jim Craft said officers were able to respond within a minute of the first call for help. “Four officers entered the theater to engage the shooter,” he told reporters. “They did hear shots being fired at the time. What they found upon making entry was it appeared the shooter died from a self-inflicted gunshot wound,” he said.

Bodies remained in the theater while police conducted forensic analysis of the crime scene. That work was delayed, however, when a bomb squad was called in to examine the gunman’s vehicle after a suspicious package was detected inside.

Television images from Lafayette showed a hectic scene at the cinema, which was surrounded by dozens of emergency medical vehicles and police cars. “It was crazy, chaos everywhere,” witness Jacob Broussard told CNN. Broussard was watching a movie across the hall when the sirens went off and the lights came on.

A voice came over the intercom asking people to evacuate the building as quickly as possible. As he was leaving, Broussard heard three shots. When he got outside, he saw a woman bleeding from the leg and realized something awful had happened.

Comedian Amy Schumer, who stars in Trainwreck swiftly offered her condolences. “My heart is broken and all my thoughts and prayers are with everyone in Louisiana,” she tweeted.