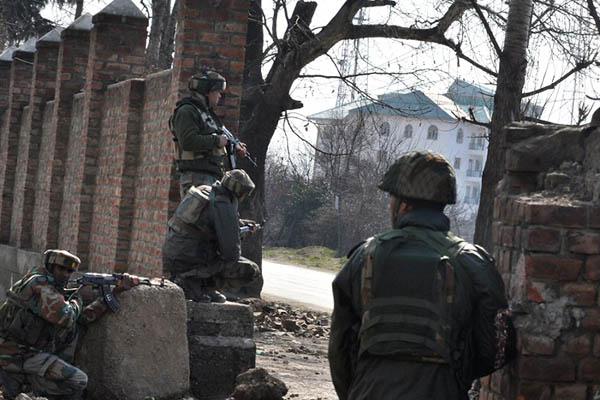 Two soldiers dead, 10 others injured in assault on paramilitary convoy.

Gunmen attacked a paramilitary convoy in India-administered Kashmir on Saturday, killing two soldiers before entering a training center for young entrepreneurs with more than 100 people inside, police said.

The militants, believed to be rebels opposed to Indian rule, assaulted a Central Reserve Police Force (CRPF) convoy before paramilitaries engaged them in a firefight in the training complex on the outskirts of Srinagar.

“Two CRPF personnel died in the initial assault on the convoy and 10 others were injured,” said Javaid Gillani, inspector general of police for the region, adding that militants then entered the complex, where they remain surrounded by police. “All the civilians present inside the building have been evacuated,” Gillani said.

The attackers were “holed up” in the main building of the institute and surrounded by government forces, local police superintendent Mohammad Irshad said, adding it was unclear how many attackers were inside. The standoff was likely to continue until day break, he said.

At least 120 people, including trainees and staff, were in the building when the militants entered. Witnesses earlier said three heavily armed militants entered the complex, which houses the government-run Entrepreneurship Development Institute in the region’s main city.

They said the gunmen asked everyone inside to “save themselves” and move to a nearby hostel on the campus. “They [gunmen] barged into the reception area as CRPF soldiers were firing towards them. They asked everyone to save themselves and go to the next building,” a witness who worked at the institute said, asking to remain anonymous.

Another witness said the attackers made clear they did not want to harm the civilians as soon as they entered. “I saw them and everyone panicked. But they asked us to leave the building quickly and said only the soldiers were their enemies,” the witness said after he was evacuated.

The 10 personnel who were injured in the convoy attack were shifted to a military hospital, CRPF spokesman Bhavesh Chaudhary said.

Kashmir has been divided between rivals India and Pakistan since the two countries became independent in 1947, but both claim the territory in full. The region largely shut down last Monday as a general strike was called to protest against the killing of two civilians during a gunbattle between troops and suspected separatist militants.

Authorities also imposed a curfew in parts of Srinagar, where hundreds of police and paramilitary troops patrolled deserted streets and erected checkpoints to halt any protests.

Since 1989 several rebel groups have been fighting Indian soldiers deployed in the territory, demanding either independence or a merger of the region with Pakistan. The fighting has left tens of thousands, mostly civilians, dead.

Overall violence has sharply declined during the last decade, but encounters between armed rebels and government forces occur regularly.