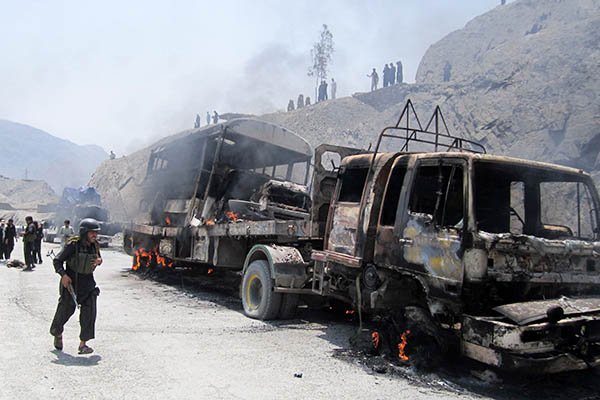 Gunmen in Pakistan on Sunday fired bullets at an oil tanker carrying fuel bound for NATO troops in Afghanistan, setting the vehicle and a car ablaze, police said.

The attack highlights the continuing dangers facing the U.S.-led coalition as it winds down operations in Afghanistan with 51,000 combat troops due to pull out of the country by the year’s end. Sunday’s incident occurred in Balochistan province, which is rife with Islamic militancy, sectarian violence and ethnic insurgency.

“Two gunmen riding a motorcycle intercepted a NATO oil tanker in Dera Murad Jamali city and fired bullets at it,” said local police official Ali Gohar Lehri. “The tanker and a car close to it caught flames,” he added. “The driver and cleaner of the tanker and all passengers traveling in the car jumped out of their vehicles to save their lives.”

The attackers escaped the crime scene. Another police official confirmed the shooting.

“The main highway between southern Sindh and southwestern Balochistan province remained closed for around two hours because of the burning vehicles,” said Noor Muhammad Breach, a senior police official in the area. “Hundreds of vehicles were stuck on the highway,” he added.

Pakistan has been a key transit route for the U.S.-led mission in landlocked Afghanistan but the delivery of supplies over the past 13 years has been far from straightforward. NATO supply trucks, which carry everything from fuel to munitions and food, often come under attack on their journey between Karachi and border crossing points.

Last month, Pakistani troops foiled an attack on a NATO supply terminal in the northwest, killing one attacker and forcing others to flee.

Supply lines have also been disrupted in the past because of tensions between the U.S. and Pakistan. In 2013, members of Imran Khan’s Pakistan Tehreek-e-Insaf (PTI) party forcibly searched trucks in an effort to halt NATO supplies as a protest against U.S. drone strikes in Pakistan.