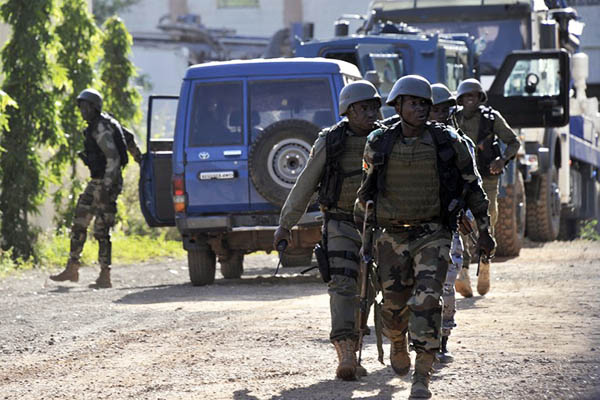 Around 170 guests and staff are being held by two or three attackers, according to security forces.

Gunmen went on a shooting rampage at the Radisson Blu hotel in Mali’s capital Bamako on Friday, seizing 170 guests and staff in an ongoing hostage situation that has left at least three people dead.

Malian security forces are storming the hotel and at least a dozen hostages have been freed after being attacked by “two or three” assailants, according to a spokesman for the security ministry. Automatic weapons fire was heard outside the 190-room hotel in the city center, with the ministry spokesman saying at least three hostages had been killed.

Their identities were not yet known.

Security sources said the gunmen were jihadists who had entered the hotel compound in a car that had diplomatic plates. Chinese state news agency Xinhua said at least seven Chinese nationals were among the hostages, while Turkish Airlines said six members of its staff were caught up in the attack. “It’s all happening on the seventh floor, jihadists are firing in the corridor,” a security source told AFP earlier.

Malian soldiers, police and Special Forces were on the scene as a security perimeter was set up, along with members of the U.N.’s MINUSMA peacekeeping force in Mali and the French troops fighting jihadists in west Africa under Operation Barkhane. An AFP journalist saw three freed hostages, including two women, who told him they had seen the body of a fair-skinned man lying on the floor of the hotel.

The Rezidor Hotel Group, the U.S.-based parent company of Radisson Blu, said two people had taken a total of 170 people hostage. The company said it was “aware of the hostage-taking that is ongoing at the property today, Nov. 20 2015. As per our information two persons have locked in 140 guests and 30 employees.”

The U.S. embassy in Mali advised any American citizens in the country to shelter where they were, contact their families and monitor local media.

The Radisson attack follows a nearly 24-hour siege and hostage-taking at another hotel in August in the central Malian town of Sevare in which five U.N. workers were killed, along with four soldiers and four attackers. Five people, including a French citizen and a Belgian, were also killed in an attack at a restaurant in Bamako in March in the first such incident in the capital.

Islamist groups have continued to wage attacks in Mali despite a June peace deal between former Tuareg rebels in the north of the country and rival pro-government armed groups.

In mid-2012 northern Mali fell under the control of jihadist groups linked to Al Qaeda. They supplanted Tuareg rebels and imposed a brutal interpretation of sharia law on the region, with Bamako reeling from a military coup. The Islamists were largely ousted from towns by an ongoing French-led military operation launched in January 2013, but they have since launched sporadic attacks on security forces from desert hideouts.

Despite the peace deal, large swathes of Mali remain beyond the control of government and foreign forces. In a recording authenticated by Malian authorities this week, a jihadist leader in Mali denounced the peace deal and called for further attacks against France, which is helping national forces fight extremists.