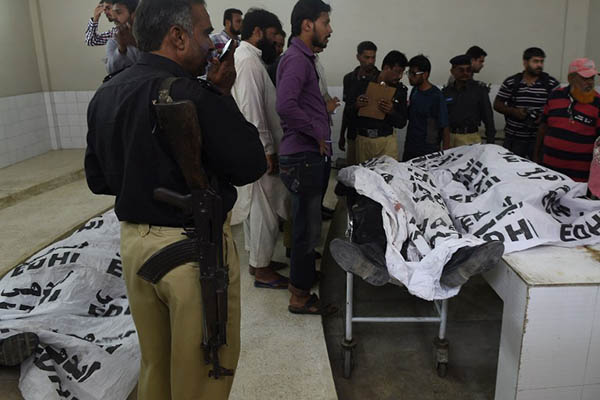 “The gunmen first opened fire on three policemen in the streets of Orangi Town, killing them all,” he said, adding: “Later they shot dead four policemen, who were sitting in a police mobile van” a few streets away.

Abdul Kareem, an official in Abbasi Shaheed Hospital where the bodies were taken, also confirmed the casualties.

The polio workers, who were unharmed in the attack, were on the third day of an immunization drive.

A faction of the Pakistani Taliban, Jamaat-ul-Ahrar late Wednesday claimed responsibility for the attack. “We claim responsibility for this attack on police in Karachi, this was a part of ongoing attacks on police and law enforcement agencies,” said group spokesman Ehsanullah Ehsan in a statement sent to AFP by email.

Islamist outfits including the Pakistani Taliban say the polio vaccination drive is a front for espionage or a conspiracy to sterilize Muslims.

Police and Rangers later cordoned off the areas where their colleagues had been killed.

The interior of the police van was heavily soaked with blood, with an officer’s cap lying on the front seat.

Speaking to the media, provincial police chief Allah Dino Khawaja announced a $50,000 reward for the arrest of the gunmen, as well as $20,000 compensation to each of the victims’ families.

Pakistan is one of only two countries in the world where polio, a crippling childhood disease, remains endemic. Attempts to eradicate it have been badly hit by militant attacks on immunization teams that have claimed more than 100 lives since December 2012.

The most recent attack came in January, when a suicide bomber blew himself up outside a polio vaccination center in Quetta, killing 15 people—two civilians and 13 security officials. Authorities want to vaccinate 35 million children under the age of five, wiping out the disease by the end of 2016.

In Karachi, a heaving metropolis of around 20 million, authorities have enlisted 2,500 female “neighborhood vaccinators” drawn from local communities to support the program.