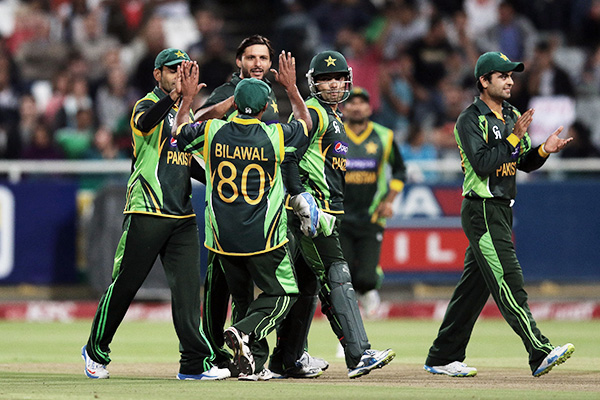 Pakistan leveled its recent series against South Africa by winning the final Twenty20 cricket match on Friday at Newlands.

The victory was propelled by Mohammad Hafeez and Umar Akmal, who went on a hit-scoring spree. Hafeez, the team captain, scored 63 runs—including three sixes—off 41 balls, while Akmal managed 64—including four sixes—off 38 deliveries.

Pakistan’s innings gained momentum when Wayne Parnell was no-balled in the seventh over and Hafeez slammed the free hit over the square-leg fence for the first six. Hafeez hit two successive sixes off left-arm spinner Aaron Phangiso in the 12th over before Akmal followed suit in an over which yielded 21 runs. Three overs later, Morne Morkel conceded 22 runs as Akmal hit successive deliveries for a six, a four, and a six again.

Pakistan won the match by racking up 176 runs for four wickets; hosts South Africa managed 170 for four. This was Pakistan’s best score in the four-match, 10-day series against South Africa. “We have been working hard,” said Hafeez, who was named Man of the Match and Man of the Series. “We knew we had to win this game to stay positive for the rest of the series.”

On the bowling side, Pakistan’s performance was equally impressive. Afridi took three wickets for 28 with his brisk leg-spinners after South Africa had raced to 58 for no wicket in the first seven overs of their reply. The hosts finished with 170 for four, thanks largely to an unbroken stand of 53 off 28 balls between J. P. Duminy and David Miller. But they were never really in contention, despite scoring 19 runs off the penultimate over, bowled by Junaid Khan. Sohail Tanvir bowled a series of yorkers and low full-tosses to restrict South Africa.

Hashim Amla and Quinton de Kock gave South Africa a fast start, but Shahid Afridi struck with his first delivery when De Kock swept him to deep backward square leg. Afridi took wickets in both his next two overs, having Faf du Plessis caught at midwicket and bowling out A. B. de Villiers. Amla went on to make 48 runs before he was caught in the deep off Saeed Ajmal, leaving Duminy (47, not out) and Miller (22, not out) with an improbable task.