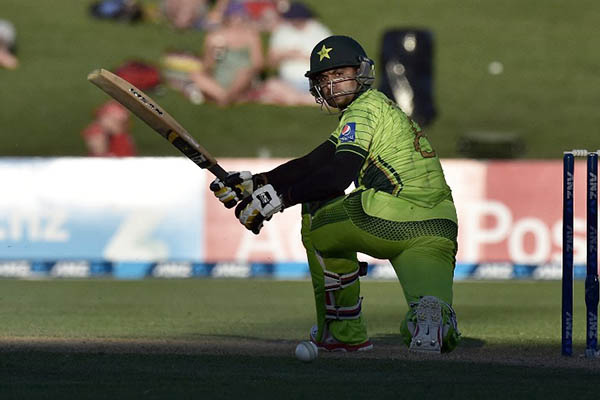 Just two weeks ago, Pakistan were at a low ebb after crashing to a humiliating 124-run defeat against India in the group stage. But Pakistan batsman Hafeez says his teammates vowed to stick together despite the avalanche of criticism and they reaped the rewards in memorable fashion on Sunday.

Gaining sweet revenge over India, Pakistan thrashed their rivals by 180 runs at The Oval to win the Champions Trophy for the first time. “It’s a great team effort. After losing the first game, we had no chance to lose again,” said Hafeez, who played an important role in the win with a classy 57 not out. “We showed great character. I’m so happy for the nation of Pakistan who have been waiting for this for a long time.”

Fakhar Zaman’s maiden one-day international 100 laid the foundations for Pakistan’s formidable total of 338-4. After man of the match Zaman finished on 114, Pakistan pace bowler Mohammad Amir ripped the heart out of the India batting line-up with the wickets of Rohit Sharma, Shikhar Dhawan and Virat Kohli.

India, looking to retain the Champions Trophy, went down without a fight as they collapsed to 158 all out and Amir felt his spell was crucial. “Rohit, Dhawan and Kohli have been in tremendous form so I was looking for early wickets—and I did it,” he said.

Pakistan’s first global 50-over title since the 1992 World Cup reflected well on their Australian coach Mickey Arthur, who kept his squad from losing focus after their dismal display against the Indians earlier in the tournament. Arthur admitted Pakistan were desperate to prove they could go toe to toe with tournament favorites India with the title up for grabs.

“It’s been an up and down ride for us but I’m so proud of the boys,” Arthur said. “The whole group kept believing, we knew we were better than what we showed in the first game against India. That was an aberration. We want to be more consistent as a team.”

Pakistan captain Sarfraz Ahmed added: “After the India match in the group stage, I told the players the tournament hadn’t finished yet. Credit goes to my boys. Fakhar is a great impact player, he played like a champion batsman. Amir bowled brilliantly but all my bowlers bowled really well.”

India captain Kohli conceded Pakistan were worthy winners and, while he claimed to be proud of his players, his admission that the new champions played with more passion was a damning indictment. “I want to congratulate Pakistan first, they had an amazing tournament. The way they turned things around speaks volumes for the talent they have in their side,” Kohli said. “They were more intense and passionate today, they deserved to win. I’m disappointed but I have a smile on my face because I’m proud of how my team has performed in the tournament overall.”