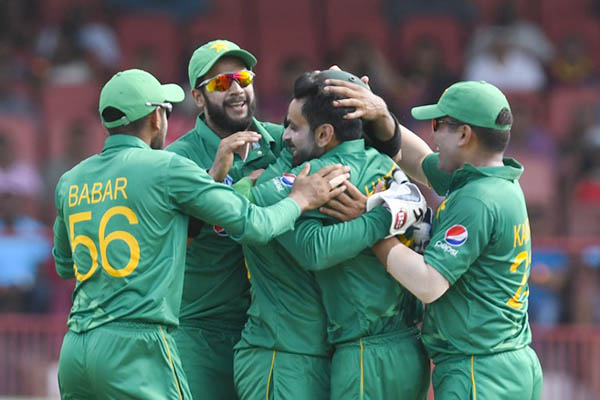 Imad Wasim, 2nd from left, and Mohammad Hafeez, 2nd from right, celebrate a dismissal with teammates in September 2017. Randy Brooks—AFP

Imad Wasim had been plagued by fitness problems, while Mohammad Hafeez’s performance in T20 format has paved way for his return

All-rounders Mohammad Hafeez and Imad Wasim staged a comeback on Friday in Pakistan’s 15-member squad for the three-match one-day series against New Zealand.

Hafeez, 38, who is a veteran of 200 one-day internationals, missed out on Pakistan’s one-day series in Zimbabwe in July this year and was also left out of the Asia Cup in September. But he showed good form in the 3-0 Twenty20 series win against Australia and in the first Twenty20 match against New Zealand—both in the United Arab Emirates—to force his way back in the side.

Wasim has not been part of the one-day squad since Pakistan’s series against Sri Lanka in October last year, and has been plagued by fitness problems.

The first two one-day internationals will be played in Abu Dhabi on Nov. 7 and 9, with the third in Dubai on Nov. 13.

Pace spearhead Mohammad Amir has been left out of the squad since his unimpressive performance in the Asia Cup where he went wicketless in three matches.

Opener Shan Masood was surprisingly dropped from the Asia Cup squad despite not playing a single match and scoring hundreds in each innings for Pakistan ‘A’ against New Zealand ‘A’ in the four-day game in Dubai this week.