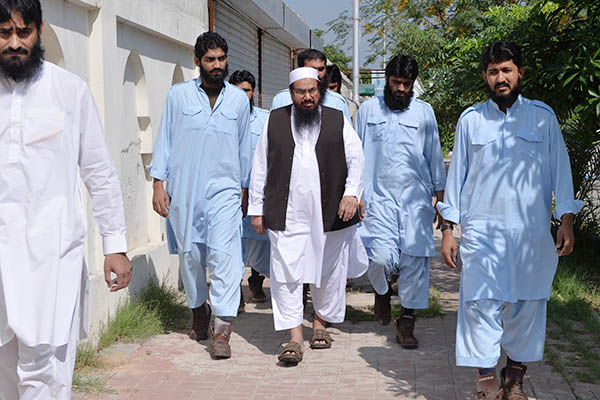 Spokesman for Jamaat-ud-Dawa confirms detention order will be challenged in court.

Protests are planned across Pakistan’s major cities on Tuesday over the house arrest of Hafiz Saeed, one of the alleged masterminds of the 2008 Mumbai attacks.

Firebrand cleric Saeed, who heads the Jamaat-ud-Dawa group and has a $10 million U.S. bounty on his head, was to be placed under “preventative detention,” according to an order from the interior ministry. Police took Saeed away from a mosque in Lahore late Monday and escorted him to his residence where they appear to be holding him under house arrest, an AFP journalist reported.

“My detention orders are unlawful and we will challenge them in the court,” Saeed told reporters before he was led away by police. “These orders have come from Washington,” he claimed.

Dawa, listed as a terror outfit by the United Nations, is considered by the U.S. and India to be a front for Lashkar-e-Taiba, the militant group blamed for the attack on India’s financial capital. Saeed is believed by the U.S. State Department to be one of the masterminds of the attack.

There has not yet been any reaction from either India or the U.S. to Saeed’s detention.

Dawa organizers told AFP on Tuesday that protests were planned in major cities including Islamabad, Karachi and Lahore. A spokesman for the group, Nadeem Awan, confirmed the detention order would be challenged in court.

It was unclear why Pakistan chose to take action now. The detention order placed Dawa and a foundation tied to it on a watch list, and also ordered the detention of four other members.

As he was escorted away by police on Monday Saeed vowed his movement would continue “until Kashmir’s independence.”