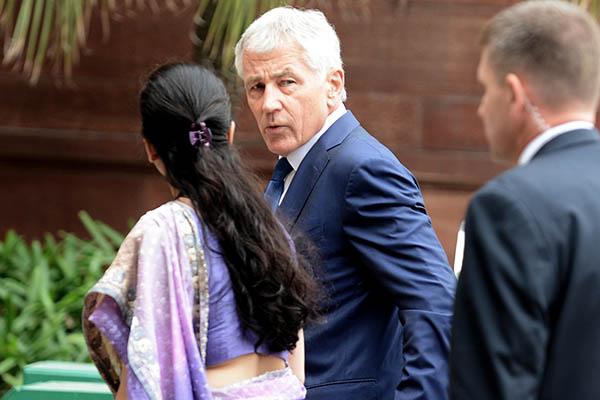 U.S. defense secretary says renewing a 10-year defense framework agreement due to expire next year is a high priority.

India’s new government is eager to modernize its Soviet-era military after years of slow procurement and the collapse of deals over corruption allegations. Hagel said renewing a 10-year defense framework agreement that is due to expire next year would be high on the agenda in his talks with Indian leaders.

“The point of my trip here is to take advantage of the opportunity to meet with a new Indian government,” he said ahead of his arrival. “We have a number of things, specific projects that we will discuss. One is the renewal of the 10-year defense framework agreement.”

Hagel said Afghanistan would also be on the agenda, as U.S. Secretary of State John Kerry visits Kabul to try to resolve disputed elections that have raised fears of civil war.

India has voiced concern about instability in Afghanistan as the United States prepares to withdraw its troops. Hagel, who is due to meet his Indian counterpart Arun Jaitley later Friday, is in Delhi ahead of Prime Minister Narendra Modi’s first official visit to Washington in September.

The United States has been racing to make up for lost time in building ties with Modi, a Hindu nationalist leader who was denied a U.S. visa in 2005 over allegations he turned a blind eye to anti-Muslim riots as leader of the state of Gujarat. Washington also sees India as a key strategic partner in the face of an increasingly powerful and assertive China.

India is close to finalizing a $1.4 billion deal to buy at least 22 U.S. Apache and 15 Chinook helicopters, according to an Indian defense official.

On Wednesday, the Indian cabinet agreed to increase the limit on foreign direct investment in defense to 49 percent from 26 percent, in a move to attract international capital. “India has made progress on its direct investment framework on percentage ownership, outside ownership in companies … And we’ll talk about that,” Hagel said.