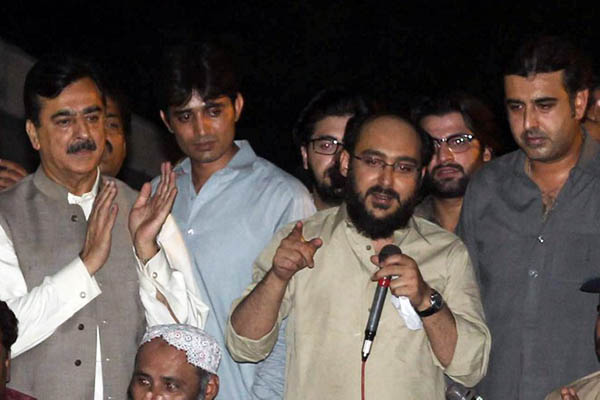 Kidnapped son of ex-prime minister Yousaf Raza Gilani says he was kidnapped by Al Qaeda, which hoped to exchange him for detained militants.

The freed son of a former Pakistani prime minister Wednesday revealed details of the raid by U.S. and Afghan forces last week, which rescued him three years after he was captured by Al Qaeda operatives.

Ali Haider Gilani, son of Yousaf Raza Gilani, was found during a counter-terror operation in eastern Afghanistan three years after he was kidnapped on the outskirts of Multan. Talking to the media in his hometown, Gilani said his captors told him they were expecting a U.S. raid on May 9 and moved him to another location, but they were being monitored.

“There was an awesome combat between Al Qaeda and U.S. security forces in the night of May 9, 2016,” he said, as he described seeing the eyes of the soldiers and green lights from their helicopters in the darkness. “I could only see the red eyes of U.S. soldiers and the Al Qaeda operatives left me alone in a deserted mountain area,” he said. “I fell down myself on the ground when U.S. soldiers captured me” as drones hovered overhead, he added. “The cobra helicopters appeared from another direction and shone green lights,” he said.

The U.S. forces then transmitted his picture to Bagram Airfield. “At last, I was identified as the son of Pakistan’s former prime minister Syed Yousaf Raza Gilani,” he told reporters at his residence, hailing the U.S. soldier who found him as his “savior.”

NATO has said he was rescued by U.S. Special Operations Forces and Afghan commandos.

Talking about his abduction, Gilani said he was kidnapped by Al Qaeda to be exchanged for the release of high profile Al Qaeda operatives. He spent most of his captivity in North Waziristan, where the military has been battling Taliban and Al Qaeda-linked militants, before being taken across the border to the Afghan province of Paktika.

“I spent the last 40 days of my captivity in Afghanistan and I had served two-and-a-half years in North Waziristan,” he said.

Gilani said he was kept in caves and sometimes in vehicles to keep him safe from drone attacks. Despite the ordeal, he said the cool weather in the mountains was a pleasant contrast to Multan, Pakistan’s hottest city.

Gilani, who is a triplet, said he was working on writing a book about his captivity.

He was kidnapped on May 9, 2013, just two days before a bitterly contested national election in which he was campaigning.